How Tahiti ended up on our itinerary for a family vacation is pure serendipity. After all, when you think of this tropical paradise, it typically conjures up images of romance… watching the sunset while sipping cocktails from the back porch of your overwater bungalow… Serene.  Tranquil. Peaceful.  Basically the antithesis of a baby. At least, an awake one. But it was precisely because of our baby that Tahiti even entered into our radar. You see, we were actually planning a trip to the South Pacific when the thought of a 10 hour flight with our 9 month old daughter sent me into a panic.  If you read my previous post on Japan (which obviously you should!), you might be wondering why I was worried considering she had slept the majority of that flight. But this was different. Naia was mobile now. She had perfected her bear crawl and it was her preferred method of exploration. How would I possibly get her to sit still for 10 or more hours?! I simply couldn’t. And so my eyes went to the map in search of a midpoint between our home, Hawaii, and, the intended destination, New Zealand. There, smack dab in the middle, was Tahiti.

At first, I was practical. I assumed we would just stay close to the airport for a night or two and then continue on our journey. Short. Simple.  Sweet. When I pitched the idea to my husband, however, all practically went out the window. “Why would we go to Tahiti and not stay in an overwater bungalow?!” He had a valid point… or maybe I’m just easily persuaded.  What I couldn’t allow, though, was this long layover to break the bank. I needed to stay within budget and therein laid the greatest challenge of this endeavor: finding a bargain bungalow in Tahiti, one of the most expensive destinations on earth.

Is there really such a thing? Why, yes, apparently there is – the conveniently located, Le Meridien, Tahiti.  Don’t get me wrong. The room was not cheap by traditional standards. Coming in at $495 a night, it was still a splurge but one we considered worthwhile for the once-in-a-lifetime type of experience it provided. Granted there are more extravagant bungalows in French Polynesia, especially if venturing to the island of Bora Bora. But, in this case, more extravagant meant more expensive. Besides Tahiti was just a skipping stone on our itinerary. I had to remind myself of this repeatedly as to ward off the temptation of turning it into its own frenzy of flights, ferries, etc. Nope, Tahiti was meant as a relaxing escape, a “sanity saver” before venturing onward to the South Pacific… and so, in that respect, Le Meridien Tahiti was absolutely perfect.

Before describing the bungalow, there’s a travel tip I often utilize which will make your next trip with a baby a breeze. I call it “The Secret Sandwich Method.”

Simply, stay at the same airport hotel for the first and last day of your trip.

1.) Economics – Airport accommodations are usually a fraction of the price, compared to the options centered around the city or nearby attractions. In our case, it saved us $400/night versus checking in and out of the bungalow, directly.

3.) Convenience – After spending endless hours in the air trying to entertain and pacify a small child, you will be exhausted when you land. Don’t attempt to set out exploring -jetlag can be extra brutal with a baby! Instead, get to the hotel, put down the baby, and, if at all possible, pick up a drink. Relax.  Recoup.

4.) Storage – This is the main reason I urge you to stay at the same property when employing the “The Secret Sandwich Method”. Since you will be returning guests, most hotels will happily hold your belongings in the interim (call ahead to confirm!). If there are items you brought just for the flight or clothes that you don’t need until later in the trip, leave them at the hotel and take a load off – literally!

… and now Back to the Bungalow 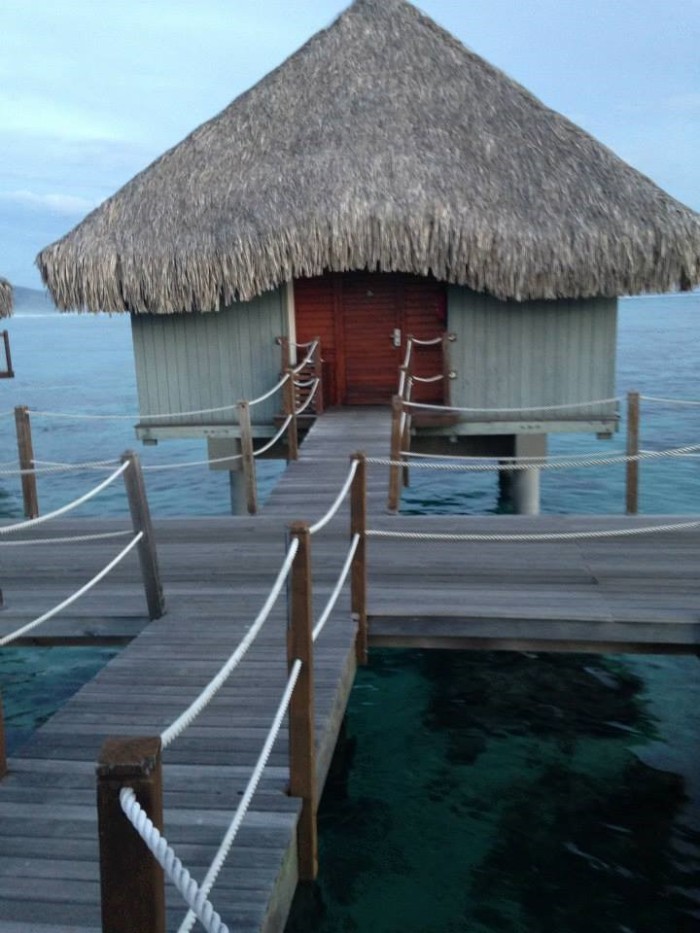 If you are an ocean-lover, Le Meridien, Tahiti, is one of those experiences that will sneak into your soul, and set up residence forever. It is my “happy place” – a special spot to which I regularly return in my daydreams.  The bungalows have a rustic feel which may deter those seeking a more luxurious getaway but I felt that the slightly weather worn cabins exuded an air of authentic charm.  Connected by a boardwalk, the property contains about a dozen overwater bungalows scattered throughout a calm and beautiful bay area. 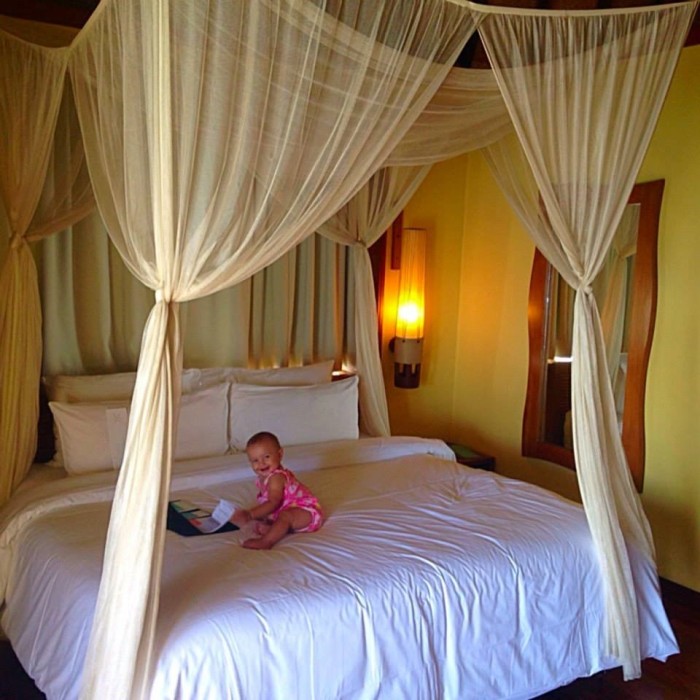 The units are self-contained, featuring a king sized canopy bed, sofa, mini bar, spacious bathroom with tub (a must with babies), air conditioning, and a private terrace enclosed by thin metal webbing as to ensure our overly confident pre-toddler didn’t take a tumble into the waters below. 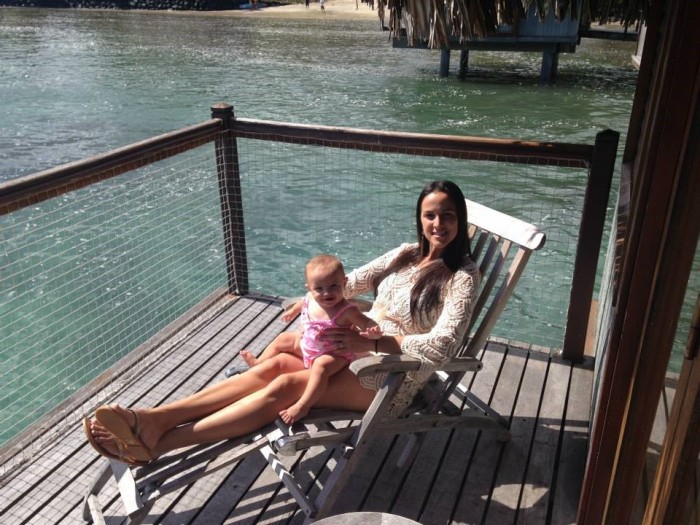 Now usually I’m against holing up in your hotel for any extended amount of time as it defeats the whole point of travel. However, I’d argue that bungalows are part of the Tahitian experience and, as such, worthy of such retreat. With that said, we spent the majority of our time in Tahiti in the room or exploring the reef directly below. During the brief stints outside the bungalow, we took advantage of the unique, on-site amenities like the sand pool.

Swimming with Sharks and Mantas in Moorea

While I acknowledge that the overwater bungalow is probably the pinnacle of the Tahitian experience, I couldn’t completely deny my gypsy spirit and eventually acquiesced to the urge to explore beyond Le Meridien.  As it turns out, Tahiti has an even prettier sister and her name is Moorea.  This sibling island, located just ten nautical miles from Tahiti, is easily accessible by a ferry that runs daily from downtown Papeete.  You can learn more and even book online here: https://www.aremiti.net/

Much of Moorea’s allure stems from her breathtaking scenery; the stark contrast of jagged moss colored mountains against the turquoise sea. What attracted me most was the world waiting beneath these waters and among the creatures I hoped to encounter were those most people hope NEVER to encounter… I’m talking, of course, about sharks. Living in Hawaii, I had previously experienced the soar of adrenaline that occurs when beholding the earth’s most feared predator from the safety of a cage. However, at the “Lagoonarium”, located off Moorea’s eastern shore, there are no metal bars between you and your new friends. In fact, there are no cages whatsoever. The sharks are indeed wild as are the countless fish, sea turtles and manta rays that swim among them. And despite the name, which I’ll admit deterred me at first, the “Lagoonarium” is not your typical tourist trap. The laid back vibe of the whole experience, start to finish, might be exactly why it tops the Tripadvisor list of “Things to Do” in Moorea.

Before our trip, I secured our reservation on the Lagoonarium’s website: http://lagoonarium.e-monsite.com/ . We were able to arrange pick up directly from the ferry pier, although, if you have the time you can rent a car here as well. The Lagoonarium is located on the island of Motu Ahi and you will be transported to this private piece of paradise by small, motorized boat, which is a fun little experience in itself. (Bring your own baby lifejacket, if safety is a concern). The island of Motu Ahi has been transformed by its owner into a beautiful albeit eccentric sanctuary, complete with thatched huts, an eatery and even a bathroom decked out in seashell decor. Here, you truly feel like an islander, part of your own self-sustaining community of ocean lovers living off the land…  In reality, you are not – there is electricity and running water – but hey, it still feels pretty remote…

Now, I never imagined I could categorize a shark swim as “baby friendly” but as it turns out they make excellent bait. JUST KIDDING! All joking aside, the extra amenities offered on Motu Ahi transformed my thoughts on ocean activities with children in the “can’t swim” age range. While the hubs and I took turns in the water, the thatched huts made an ideal, shaded retreat to hang with Naia.

Granted, taking turns, also meant diving into shark infested waters solo, but in the end, that unprotected solitude while staring a shark in the eye added a whole new element of excitement to this adventure.

And please, try the Poisson Cru!

After a day in Tahiti’s turquoise waters, what better way to embrace the island spirit than sampling the signature dish of “Poisson Cru”?! Quite similar to its Latin cousin “ceviche”, the fish in poisson cru is essentially “cooked” using citrus (… and by cooked, I mean not actually cooked. The literal translation of poisson cru is “raw fish”. Remember you are in the French Polynesia! ). Once opaque, the fish is tossed with diced veggies and mixed with coconut milk for a dish nothing short of divine.  You can find poisson cru, sometimes under its alias of “ota ‘ika” just about anywhere on the islands, even in the supermarket. All options are fantastic and not once did it disappoint. Oh and don’t forget to wash it down with a cold, refreshing Hinano….  Rinse and repeat.  Aren’t you glad you worked a long layover into your itinerary?? 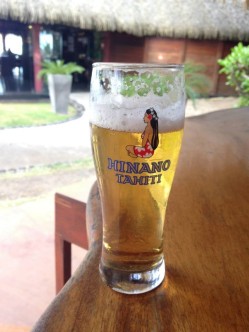 5 thoughts on “Tahiti: The Long Layover – A Babies Abroad Story”