I had learned what many others had discovered before me – that Africa, for all its perils, represented wilderness and possibility. – Paul Theroux

My now husband and I talked about what our honeymoon would be like before we ever talked about getting married. So when the blessed event finally occurred, we knew that an African Safari was exactly what we wanted to do. The Serengeti is a place like no other on Earth filled with exotic wildlife we always dreamed of seeing. The landscape is a dramatic backdrop and home to so many beautiful creatures. I will be forever grateful we got to experience a safari and hope to make it a repeat trip in our lifetime.

Welcome to the Serengeti

Planning a safari involves figuring out the “where, when and how.” We knew we wanted to go to the Serengeti so the “where” was pretty easy. Tanzania has a stellar reputation when it comes to their parks. About a third of the land consists of national parks and the drivers must stay on the roads, so you won’t disturb the wildlife or inadvertently destroy their habitats.

Regarding the “when”, we knew we didn’t want to go during peak season and end up shoulder to shoulder with 50 other jeeps. We decided on early October to align with our work schedules and it’s also about the start of the short rain season. We were very lucky and didn’t have any rainy days!

The “how” included budget and tour companies. I started researching with a Forbes article on safari companies and read a few blogs on the DIY safaris. Since this was our first time to Africa and our honeymoon, we knew DIY was not for us, we easily eliminated a few of the more expensive companies and crossed out the roughing it safaris as well. We interviewed three companies and decided on Game Watchers. We worked closely with Rick from Game Watchers via phone and email to carefully build our itinerary. He provided expert guidance and advice based on our budget, timeline and list of things we wanted to do and see. His hands on expertise was invaluable and I can’t thank him enough for the memorable trip he helped us to create!

We spent the night prior to our safari pick up in Arusha at the Mount Meru Hotel and thoroughly enjoyed the views, quiet and superb thick coffee. I recommend arriving a day early to eliminate any issues with airline delays and to give yourself a day to get over the jet lag. Ethiopian airlines ended up losing my bag and I was able to pick up a few items from the hotel instead of not having anything out in the bush.

Mount Meru is the 5th highest mountain in Africa and on a clear day can be seen from Kilimanjaro. While not as tall, it’s still a serious hike and takes about two to three days to summit. Perhaps on our next trip!

It was a 30 minute uneventful ride to the airstrip that would take us to the wild. The airstrip itself was tiny but had an open air bar/restaurant, coffee shop, and a few souvenir stalls. We took off on time in our little 15 seat puddle jumper and made it to the Central Serengeti in under an hour and a half.

This was my first time in a little plane and I had lots of irrational fears circling my brain for weeks leading up to take off about what would happen if we crashed. Since my baggage was limited to 33 lbs, I wouldn’t be able to pack the necessary survival gear and surely die of thirst out in the wild as I would most certainly be the sole survivor of the plane crash (Sorry husband). However, bush pilots are reputed to be the best in the world as they have the most experience with take offs/landings which are the trickiest parts of flying. They made us comfortable within the first five minutes. We were in good hands with even better views. 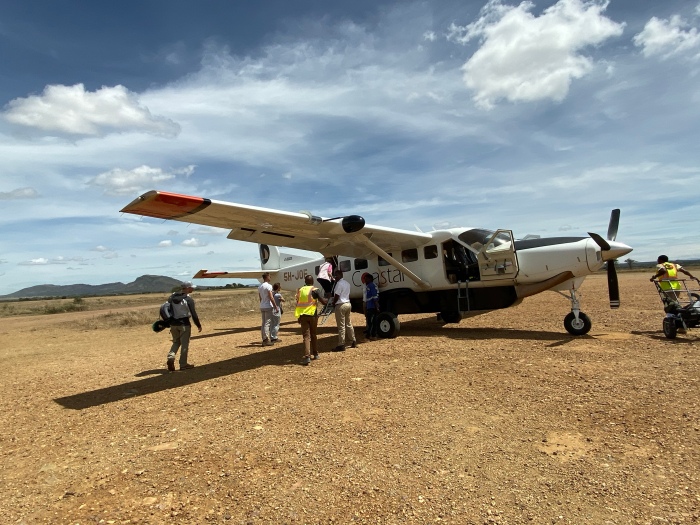 As we began our descent into the Serengeti at the Seronera air strip, we saw a few giraffes picking at the tree tops for their afternoon snack. We shrieked in amazement completely oblivious to the close encounters to come! After landing we were hustled into an open air jeep to the Nimali campsite.

It was a bumpy and dusty 45 minute ride to the camp filled with grazing Thompson gazelle seemingly greeting us to Tanzania with their wagging tails. We made a right turn and came upon the camp where would be staying for the next three days.

The Nimali Camp at Central Serengeti is like an oasis in an already unreal location. As we rolled up in our jeep we were greeted with bug spray, a warm washcloth and refreshing tea. We got to meet the entire staff and had a briefing from the camp manager, Seth. Basically, they go over what schedule you would like for game drives and meals as well as the safety ground rules, which are don’t walk around alone at night. The guides and staff will walk with you anywhere, at anytime.
The luxury camp consisted of a lounge, a dining area and eight tented guest  rooms which lie along a rolling hillside with views that stretch for miles. The camp isn’t fenced so the wildlife wanders in and out at their leisure. Our first day at lunch we saw an entire warthog family grazing without a care in the world!

Our tent was absolutely ridiculous. While I knew the accommodations would be nice and comfortable, I was completely blown away that we would actually get to stay here. The guest tent contained a cozy king size bed, desk, an over-sized reading chair and a double vanity bathroom with hot showers! We even had a patio with chairs and a table where we would drink coffee in the early morning watching the sunrise.

Our room at the Nimali Serengeti

The accommodations were only topped by the hospitality. Every day and night we had a turn down service. Every morning we were delivered freshly brewed coffee and cookies. The people that work at Nimali go above and beyond to make their guests feel comfortable. They are so friendly and kind, it was a pleasure getting to know them.
After each game drive, we would hang out in the lounge, which felt like a glamorous desert tent out of Coachella, drinking beers and swapping safari stories. Before and after dinner, we were able to sit around the campfire and enjoy the night time animal noises all around the camp.  Nimali is a little piece of paradise on Earth.

Telling stories around the campfire

Even though we were in the middle of nowhere Tanzania, we ate like kings. They did not want to hear that we weren’t that hungry, they were going to feed us anyway and everything was delicious.

Breakfast consisted of an assortment of juices and tea, made to order eggs, breakfast meats, veggies and toast.

Lunches were picnic style since we did all day game drives. We sat in camp chairs out in the bush and gorged on the best homemade chicken salad I’ve ever tasted, mini veggie pizzas, fruit and dessert.

Dinners were three course meals. We started with fresh bread and cream vegetable soups. The soups alone would be enough to make me travel back to Tanzania. The main courses were a variety of meats including a filet and ribs and fancy side dishes. Desserts ranged from fruit cheesecakes to sweet ice creams.

Nimali was also free pouring with the wines and local beers. My favorite was Mt. Kilimanjaro, which has the cheeky tagline “If you can’t climb it, drink it!”

The first full day of our game drive started off a little slow and yet even during the ride out of camp we roused some sleepy baboons, waking up in the nearby trees. We were paired with four other guests, two couples of friends from the USA who we became fast friends with as well, our guide, Daniel and our driver, Livingston. Daniel and Livingston had eagle eyes and could spot animals in the distance that looked like rocks to me. Their abilities and knowledge of the Serengeti wildlife, including the thousands of bird species was beyond impressive.
The highlights of the day included a few buffalo, zebra, multiple herds of elephants, a cheetah napping under a tree with her two cubs, and a pride of lions with one male with a glorious mane, two females and about five to six cubs who all ran to their mom and greeted her with lion kisses. 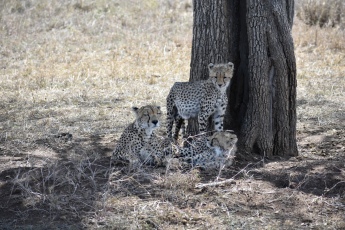 Cheetah and her cubs

Lion kisses
We encountered a hyena taking a nap in a cozy roadside ditch and another hyena snacking on a massive giraffe leg and gleefully running away with his prize. There are countless warthogs running with their tails up in the air, Thompson gazelle and Grants gazelle. You learn to tell the difference because the Grants gazelle have white back legs or you can simply remember the moniker “Grants have pants.”

Hyena running away with his snack (a giraffe leg)

After a full day of animal spotting, we began the trek back to camp and encountered an ambivalent female lion who walked right up to and around the jeep to get to the other side of the road. It was a breathtaking moment.
Our next full day game drive was a solo trip with the guides to the Moru Kopjes area in the south central Serengeti in hopes of spotting the elusive rhino. The terrain here was rockier with fewer tall grasses, even the termite mounds were smaller due to the wind and soil.  It felt like we had the entire Serengeti to ourselves here, we barely came across any other jeeps. We saw so many grazers hanging out side by side! The buffalo, ostriches, impala, elephants and giraffes seemed to be having a herbivore party.  We encountered several groups of mongooses (mongeese?) lions sleeping under a tree not too far from where a herd of zebras were enjoying their lunch, unbothered by the predators nearby.

While we didn’t encounter any rhinos here, and it wasn’t for a lack of trying from our expert guides, we DID see a mama leopard slinking around with a fresh kill in her mouth to bring back to her hidden cubs. Pressing our luck, we saw another leopard napping in a tree with their kill safely stored away and a hyena waiting at the bottom for any falling scraps. We even got to drive thru the dried up Soda Lake! It was an incredible day.

A leopard carrying her meal

Great day on the Serengeti!