From bustling city to unique safari

Overall Experience: Kenya is a wonderful country to visit for the adventurous. The country offers a well-rounded trip as you move out of the capital city of Nairobi, which gives a stark glimpse into third-world life, and into breathtaking national park regions known best for safaris. The trip will prove to be a once-in-a lifetime experience, especially if you plan a safari during your stay.

Logistics: Depending on the length of your stay, expect to spend around $2,000-5,000 on this trip, to include airfare, hotel stays, and safari expeditions.

Hotels: While in Nairobi, our friends who lived there for a year recommended we stay at Best Western Premier Nairobi for the best combination of rate, experience, cleanliness, and amenities.  As much as we did not want to stay at a Best Western, it was actually quite the pleasant stay. Amenities that drew us to book there were complimentary breakfast (a must-have if you can find a hotel with this), a rooftop pool and restaurant, a gym, and security to not only allow cars into the gated parking lot, but also a metal detector and bag search each guest must pass through to enter the hotel.  The concierge not only helps with hotel issues, but also offers a taxi/limo service counter at which you can book hourly (or whatever timeframe you need), half-day, or day-long cab service.

In Masai Mara, we stayed at the Sarova Mara game camp, which was very nice and had a delicious and extensive list of food options!  The hotel offers sturdy tented camps.  Because game drives can start as early as 5-6am and run as late as 7-8pm, we slept soundly in these tents to the sound of open nature.

Getting Around: Taxi cabs are prevalent in Nairobi, since it’s one of the largest cities, so you will not have any issues getting around.  One thing to note about cabs in Kenya is that they typically wait for you at your destination to take you back.  Thankfully, we were advised of this before taking any cabs, but could see how tourists would be surprised to find a cab driver waiting after, say, finishing a meal at a restaurant!  Make sure you are direct with your cab driver about whether you are seeking simply a one-way trip to a destination, or prefer them to wait to return you back to your hotel.  In my opinion, it’s best to negotiate a round-trip rate.  Many of the sites you may travel to won’t have cabs just waiting around, and it ends up being cheaper to negotiate the round-trip service and have your driver wait.  We did this for about 4,000 shillings total (nearly $40) for just about every excursion we took in Nairobi and it worked out well if split among 2-4 people.

Uber exists in Kenya (and it works well)!  On several occasions to go from hotel to restaurants, I simply used my Uber app.  If you have concerns over not having cell service abroad, you can use the wifi at your hotel or restaurant to request one and shoot the driver a text saying you cannot accept phone calls or provide your exact location.

Food: Kenyan cuisine is similar to Ethiopian and Indian cuisine.  While traveling there, it was rare not to see vegetable and pork/beef combo dishes or Dal on menus.  If you are into this cuisine, then Kenya is a hot spot for food.  If not, don’t fret because many of the main cities in Kenya also offer American style restaurants, such as pizza or burger joints.

You must also try the Tusker beer in Kenya!  It’s a signature beer of the region, with an elephant as its logo (Tusker! Get it?).  I do not drink beer (hardly EVER) and loved this brew.  I even bought a Tusker baseball cap while there (check out Carnivore’s picture below to see the beer logo).

Nairobi Must Haves: Carnivore is a Brazilian steakhouse style restaurant, and one of the most expensive and popular in the city. 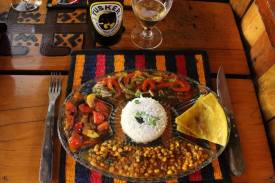 While it’s known for being a meat specialty restaurant, there are also a couple delicious vegetarian options on the menu (shown in the picture to the right; not shown on the menu online).  Dining is open air, so you can enjoy the nice outside temps while having lunch or dinner.

If you’re in the mood for authentic Ethiopian cuisine, visit Habesha. It is all covered or nearly covered outdoor seating; perfect to enjoy dining al fresco.

If you’re ever feeling like you’ve had way too much Kenyan or Ethiopian food, then go for some good old-fashioned pizza at 360 Degrees Pizza.  They make pizzas using ingredients actually imported from Italy and cook them in wood burning ovens; it’s surprising to stumble across pizza this delicious in a city from which you’d least expect it!

Nanyuki Must Haves: Since we had friends to stay with during this portion of the trip, we made most of our meals at home using fresh produce from local markets or food purchased at the local grocery store.  However, a fine-dining restaurant I’d recommend is Le Rustique.  The menu has a wide variety of options, offering American, Italian, French, and Mediterranean style dishes.  We ordered a Nutella crepe to top off our meal.  When we visited the restaurant, a group of British soldiers were having a dressy casual dinner event in a separate room of the restaurant.  It’s not unusual to see tons of British soldiers in Nanyuki as a British military base is located there.

Activities: Nairobi hosts some of the greatest animal orphanages in the country (see below Giraffe Center and David Sheldrick Elephant Orphanage recommendations).  You will no doubt have quite the adventure seeing these animals in their relatively natural habitats, as these orphanages are far different than zoos in the United States.

If you’ve traveled all the way to Kenya, you absolutely must go on a safari.  Just determine which national park appeals to you most in terms of budget and timing.  There are several national park lands that people travel to via Nairobi for safaris, such as Masai Mara, Amboseli, Samburu, and Tsavo (East or West).  We chose to go to Masai Mara based on personal preference.  We booked our safari in the Mara through JT Safaris.  The company is super communicative via email up until you are picked up at your hotel in Nairobi to either be driven or flown to the Mara by your guide.  They have various options in terms of safaris, as well as various options for transportation to and from the Mara.  Once you link up with your tour guide, check if he can find you the “Big Five” during any of your game drives: African leopard (extremely hard to find), Rhino (hard to find), African Lion (easy to find), African Elephant (easy to find), and Cape buffalo (very easy to find).

You’re bound to see Cape buffalo, zebra, giraffe, antelope, warthog, and kudu during your game drives in the Mara, but ask your tour guide to also find you some of these other harder-to-spot animals that aren’t considered part of the “Big Five”: cheetah, hyena, crocodile, hippo, and serval cat (these look similar to a small leopard, and we were tricked into thinking a Serval cat we spotted was a baby leopard).  The tour guides take great pride in finding you these animals, so it’s as exciting for them to search the land for them as for you to experience this one-of-a-kind adventure and see animals in their natural environment.

We did not get a chance to visit, but I heard multiple times along the trip that Lake Nakuru was exciting to visit.  The lake is mostly known for its hippo and crocodile sightings, but you can also see other game.

Nairobi Must Sees: The Giraffe Center is not to be missed!

At this giraffe conservatory, the giraffes will stick their necks into a walkway of a rotunda where you can feed them.  This is an activity I’d recommend on one of your first days in Nairobi, as it gives you a close-up experience with Rothschild giraffes native to this part of Africa.  The giraffes at this conservatory seem to be super domesticated and enjoy being fed by humans.  Be cautioned though: they will head butt you if you aren’t paying attention and you’re holding food in your hand.  It shakes you up!  In the distance atop the rotunda, you will also be able to see some giraffes that have had enough to eat and are walking it all off along the sanctuary land.  You’ll also be able to see the beautiful and unique Giraffe Manor (a very pricey boutique hotel) located on the land in which giraffes actually poke their heads into windows of the hotel to check for food.  Be sure to snag a $6-8 wooden giraffe statue (cute for a table, indoor garden area, or bookshelf) as a souvenir while you’re there!

If you love elephants (and even if you don’t), you must visit the David Sheldrick Wildlife Trust. 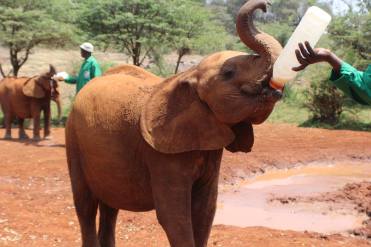 This elephant orphanage is situated in land that is part of the expansive Nairobi National Park and takes in young elephants who may have witnessed one or both of their parents’ death, usually due to poaching.  Unfortunately, the saying that “elephants never forget” rings true for these baby elephants.  When they are taken in, they are usually depressed and grief-stricken.  The idea of this orphanage is to eventually rehabilitate these young elephants so that they are then released back into the wild after a certain time period.  This is an extremely heartfelt type of experience, as you watch the elephants feed and play together.  It’s only open for one hour a day, from 11am-12pm, and it’s about a $7 entrance fee.  Make sure you GET THERE EARLY (i.e., at 10:30am to get in line).  Once they open the gate for entrance, folks pile in to try to snag a spot standing right along the roped-off mud bath area where the elephants are escorted in by guides.  Sometimes, the guides walk the elephants close enough to the ropes where you’re standing to allow you to touch them.  If you’re truly moved, you can foster or adopt an elephant.

Drop by Amani Ya Juu on one of your last days in Nairobi.  It is a fair trade nonprofit, and a wonderful place to pick up some souvenirs and gifts.  Amani has a powerful history of refugee women who create and sell clothing/goods to earn a living, so I’d highly recommend a visit to purchase locally made (and very unique) items!  It also has a garden cafe attached to it, which offers delicious meals for brunch or lunch.  We combined a trip to the elephant orphanage in the early afternoon with a visit to Amani for lunch and shopping.

Nanyuki Must Sees: Mt. Kenya is located in Nanyuki.  If you can, try to schedule in a hike here.  We didn’t get a chance to do this while visiting, but I understand it can be a beautiful hike.

Visit the Mt. Kenya Wildlife Conservancy.  This is a park where you can walk around with a guide in what at first may feel like a zoo.  What makes it a bit different from a zoo is that you’re actually allowed to touch and play with some monkeys and cheetahs under the supervision of the guides.  Kudu and ostrich roam the park grounds freely, and you can feed them.  If you’re lucky, you can actually spoon a cheetah (not a joke).  This is also where we finally caught a glimpse of an African leopard, who was sitting way up in a tree limb in a secured area.