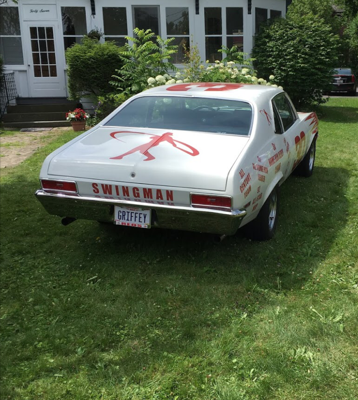 Baseball is Cooperstown. This enchanting town of just over 1,800 people rests on the picturesque shores of Lake Otsego. However, every year in late July anywhere from 40,000-60,000 baseball fanatics migrate to this tiny dot on the map to attend the annual Hall of Fame inductions. I had planned a trip over a year in advance to see my favorite childhood player get inducted into the hall of fame, Ken Griffey Jr.

We drove by car 6.5 hours from Washington, DC. The drive is mostly highway until 30-45 minutes outside of the town. It’s a beautiful ride into the Catskill Mountains. If you’re driving from the south, you’ll likely follow 81 North through the Scranton Wilkes-Barre area. Once you cross over the PA/NY line and reach Binghamton, you’ll switch to 88 East. The final leg of the trip will involve hoping on 28 North. You’ll know your close once you pass the enormous Cooperstown Dreams Park. The park includes 22 baseball fields, 104 clubhouses in a Baseball Village on 165 acres! One could say it plays the role of the gates to baseball heaven. The town itself is just 6 miles further once you pass the Park.

Baseball Hotel—Fitting name for the destination. Even by booking a YEAR in advance the closest we could get to Cooperstown for induction weekend was Richfield Springs, NY. It is about 20 minutes away from Cooperstown on the north side of Lake Ostego.  The hotel has 25 rooms each with a recently upgraded bathroom, cable TV, A/C & WiFi access. BH is broken up into a few separate houses. Each house has a common area that includes a living room, computer desk, dining room, laundry service & kitchen. This is a great option for large families or groups that would want more space than a typical hotel room. BH has a very friendly staff and were helpful with arranging taxis for our group. They also own the Lakehouse, which is just five minutes down the road right on the Lake. Truth be told Richfield Springs doesn’t offer much. Luckily next door was the neighborhood bar “Park Inn Lounge”. This was a fun hangout as we got an opportunity to mingle with the locals. It was a typical dive bar with dated décor and old pool tables, but it did the job. And if you start to get a little hungry oddly enough the bar shares its kitchen with a Chinese restaurant?!?! Surprisingly, it was some of the best Chinese food we ever had. Then again that might just be the alcohol talking…..

Ommegang Brewery — One of the highlights of the trip was our visit to Ommegang. From Richfield Springs it was an hour cab ride (I know pretty far, but these are the sacrifices one makes when searching for good beer & food). It is only 30 mins from downtown Cooperstown. The ride cost us about $70 total each way. So for a group of six, it wasn’t too bad. For those of you unaware of this brewery, it is an award winning brewery known for its Game of Thrones series of brews along with a wide variety of Belgian style beers. Ommegang opened back in 1997 on the 136 acre grounds. The land in which it was built on used to be a hop farm. So this place was meant to be a brewery. It looks like a giant barn with a grand entrance into the estate. They have a restaurant with anything from braised pork, roasted turkey & jumbo shrimp to mussels, clams & burgers. You shouldn’t be too hard pressed to find something on the menu to enjoy. Their six mainstays on draft are the Witte, Three philosophers, Abbey ale, Hennepin, Gnomegang & Rare Vos. Lastly, outback there is usually live music, a patio & corn hole for every beer drinker’s delight!

National Baseball Hall of Fame Museum— The baseball hall of fame museum is to baseball as St. Peter’s Basilica is to Catholicism. This is truly the mecca of the baseball world. It is a sprawling three story red brick building right on Main Street. The Museum opened on June 12th, 1939. It is open 7 days a week/365 days a year. Peak season (Memorial Day through summer to Labor Day) hours are from 9AM-9PM. Then from Labor Day to Memorial Day the hours of operations switch to 9AM-5PM. Admission to get in for non-members is $23 for adults & $15 for children & senior citizens. Children under 6 & active/career military receive free admission. All three floors are peppered with exhibits & galleries for the avid fan. The first floor has the over 300 bronze plaques of each HOF inductee. Along with a theatre room, Sandlot Kids Clubhouse & of course a gift shop. The second floor is where you’ll really get into the history of the game by way of the 20th century baseball time line. The timeline depicts the game’s history by generation, detailing famous players, parks & moments from the past. The 2nd floor is also home to a comprehensive exhibit of the games most hallowed legend, Babe Ruth. You might have heard of him referred to as the Sultan of Swat, The King of Crash, The Big Bam & of course the Great Bambino. Sorry baseball nerd in me, anyways this of course is a highlight of the entire museum and a must see. Lastly, on the 3rd floor is where you can find yet another major exhibit spotlighting one of the greats in Hammerin’ Hank Aaron. There is also an in depth look into the history of the ballparks of each franchise on this floor. I have visited the museum on a couple different occasions and really enjoy the Babe Ruth exhibit. In my opinion he is one of the more fascinating sports figures ever to take the field, due in large part to his seemingly god like domination.

Hall of Fame Induction Parade & Ceremony— The parade actually takes place at 6pm the night before the ceremony right through Cooperstown. As you can see from the pictures below everyone mobs Main Street and it’s a festive parade celebrating the arrival of all living Hall of Fame inductees that are able to make the trip. The parade lasts a little over an hour. The members that will be inducted for that particular year make up the end of the procession which finishes at the doors of the Museum for a special member only ceremony. 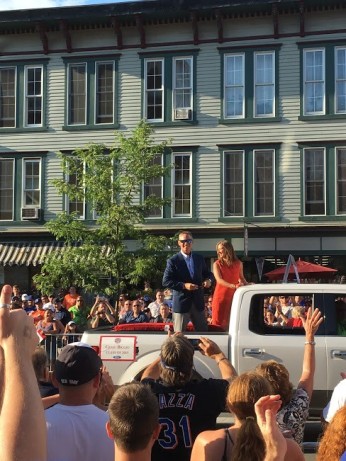 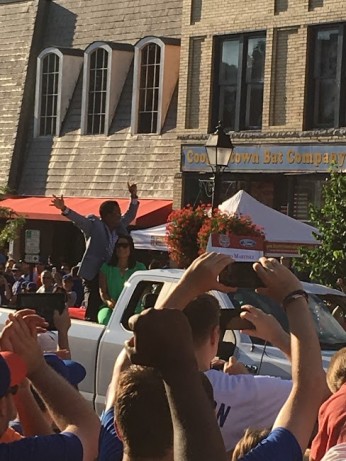 The ceremony takes place Sunday afternoon on the grounds of the Clark Sports Complex which is located on Lower Susquehanna Ave. The complex is a mile south of the museum, so very walkable. The event is held rain or shine typically lasting 2-3 hours. The ceremony will start with a couple speakers including the MLB commissioner, the chairman of the board for the hall of fame & an intro of each hall of fame member that is in attendance. Following that, there are videos & intros of each newly inducted member along with their respective speeches. Each inductee has a former teammate, coach, friend or family member introduce them before the crowd.  One of the really cool aspects of the setup is that all living past inductees who make the trip, are seated in the background of the stage to witness the induction of the newest members to their elite fraternity. Seating is first come first serve for those that don’t purchase tickets well in advance (this guy). You will need a lawn chair, blanket, cooler & sunscreen for the event. As you can imagine there are plenty of gift tents & concessions outlining the perimeter of the grounds. But from experience these lines are worse than an amusement park. So I recommend eating beforehand or packing a cooler instead. Once the event is over leaving the complex takes a bit of time as the crowds bottleneck to the road making their way back to town. Be prepared for a slow exit upon completion of the speeches.

Boating on Lake Ostego— Unfortunately we didn’t have time to do this. But it’s a perfect way to escape the heat and fill out your trip to Cooperstown if you have the time. Sam Smith’s Boat Rentals is the primary rental spot. They have options for kayaks, canoes, fishing boats & large pontoon boats. Life jackets and a tank of gas are included with your rental. Boats can be rented by the hour or for a full eight hour day. Please not that water sports are prohibited with rental boats. So if you’re looking to go tubing or water skiing this will not be an option. 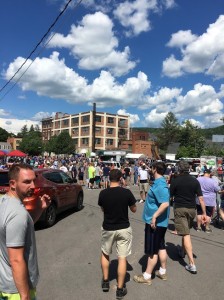 Sherman’s Tavern: Located down Pioneer street less than a block from the Main Street. A great spot to grab a drink and escape some of the crowds at the Main street bars. One thing to be aware of as this will be a theme in town, there is no A/C at Sherman’s. So make sure you get some cold ones!

Cooley’s Stone House Tavern— This was a nice little spot to hang throughout the festivities. It is located across the street from Sherman’s. The wings and fried pickles are very tasty. You can’t miss this spot as the porch and building is painted bright green. They had a very nice beer selection as well.

Cooperstown Beverage Exchange— CBE serves spirits from the Cooperstown distillery. Including cocktails with their rum, vodka, whiskey & bourbon. They also have all the local beers & ciders on tap featuring Ommegang of course.

Doubleday Café— DDC is right in the center of all the action on Main Street and was absolutely packed throughout our time there. You can get a wide range of bar fare and they have a plenty of drafts on tap to wet your beak.

Induction Weekend—Due to the large amounts of tourists coming into town for the induction, the town sets up areas for outdoor drinking & eating. You can find this near Doubleday field in the main parking lot. Also, all along Main Street there are food vendors and places to purchase drinks. You will be very likely to come across famous people while in town. During our weekend we ran into the likes of Ozzie Smith, Dwight “Doc” Gooden & Lenny Dykstra. So you’re destined to see someone during the festivities. 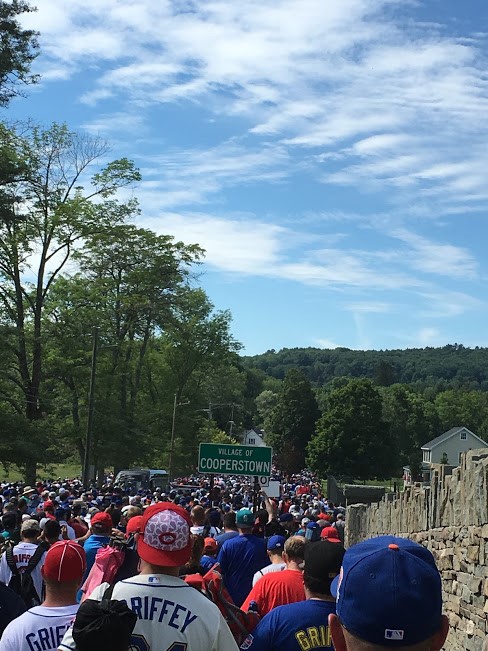 Walk back to town from the ceremony