In 1917 a young man named Salvatore DeSimone left the family farm in Penne, Italy and traveled to Ellis Island. After working in the coal mines of Western Pennsylvania, he settled in a small town in New Jersey outside of Philly because it was a community full of immigrants from Abruzzo – the region in Italy where Penne is located.

Salvatore was the only member of his family to immigrate to the States. As such, he and his only son, aka my grandfather, would return frequently to Penne. I think he would be thrilled to know that that tradition has continued with not only his son and grandchildren, but also his great-grandchildren.

My little bro was studying abroad in Florence so I decided I would visit him. My grandparents and three of my cousins also decided to come along.

After several days exploring Florence, we took the train down to Pescara – which is where most of my relatives now reside. I’ll tell you more about Pescara in minute, but let me tell you a little about Penne.

Penne is nestled between the Apennine Mountains and the Adriatic Sea. It’s not just an old town. It’s ancient. It’s been said that it’s been occupied from around the mid-neolithic period and became a seat of government for the Vestini people sometime around 300 BC. However, after Penne was given to Margaret of Parma, the daughter of Holy Roman Emperor Charles V for a wedding present, the town became a powerful center for the Abruzzo region. During this time many palaces and civic structures were built.

Since most of these historical buildings used bricks, Penne earned the appellation of “Città del mattone”, i.e. the “Town of bricks”. It was even dubbed “the small Siena” because of the prevalence of these bricks.

Although it was a part of the Roman Empire, my grandfather told me a folklore that Penne was never actually conquered by the Romans. That’s because whenever the Roman soldiers would arrive the locals would feed them so much food and wine that when the soldiers woke up the next day, they forgot why they were there.

To be honest, there’s not a ton to do in Penne. In fact, you can probably take-in all of the medieval structures like the Duomo of Penne, Church of Santa Chiara, the Aliprandi Palace, and San Francisco’s gate in just a couple of hours. You can then take a stroll down St Francis’ boulevard and pop into a cafe for a quick drink or snack. There’s also an open air market if you want to do a little shopping – I got an awesome cap and scarf for around $20.

Outside of town you can visit the National Park of Gran Sasso and Monti della Laga where you can take in the scenic Regional Natural Reserve of the Lake of Penne.

During my second visit during New Year’s 2016, I had the opportunity to visit my family’s homestead with my distant relatives. Oddly enough, my mom, sister, and brother-in-law also happened to be in town to celebrate New Year’s, so they also went with me and my best friend.

I honestly can’t put into words how amazing that visit was. It’s not every day you get to see the exact spot where your family originated from.

Ultimately, if you’re looking to get off-the-beaten path and explore one of Italy’s hidden treasures, Penne could be an interesting option. But, I wouldn’t make the trek unless you’re already in Abruzzo. Again, Penne is not a place where you can spend several days. But, you just can’t beat walking the streets of such an ancient town.

You should, however, spend a couple of days relaxing on the beach in Pescara and then make the short bus ride up to Penne.

Unlike Penne, Pescara is a modern city. It was only formed in 1927, so there’s not a lot of history here. But, since it sits on the Adriatic, it’s known for being a popular beach resort that doesn’t get many American visitors. In fact, the first time I went to Pescara the owner of a wine shop asked if we were American, Canadian, English, or Australian.

Pescara, since it’s a resort town, has plenty of shops, cafes, bars (even a cool Irish pub appropriately called Jayson’s Irish Pub), and lots of cultural activities like an internationally known jazz festival, and a film festival as well. If you’re a football fan, Pescara is home to a pretty solid soccer team that was promoted to Serie A in 2012.

Or, you can stand on the beach recreating Pearl Jam’s “Given To Fly” while wearing a Transformers shirt like it’s 2007… 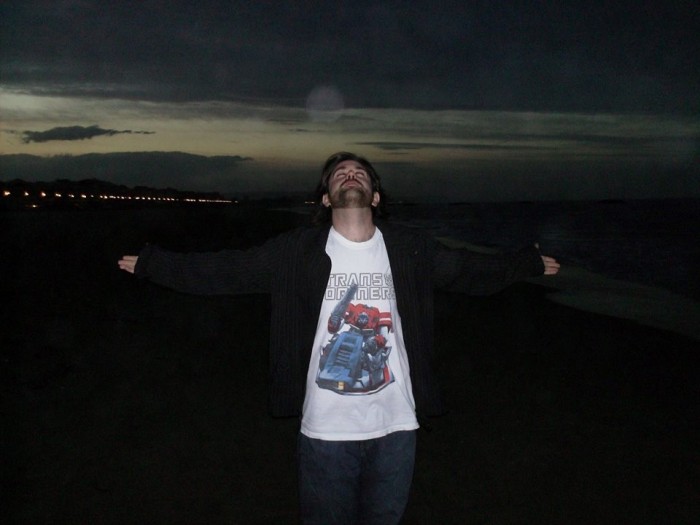 If you happen to ring in the New Year like I did, expect to keep the celebration going until the wee hours of the morning. That’s because Pescara does New Year’s right.

After having dinner at one of my relative’s, we went outside at midnight and watched fireworks go off from all directions of the house. It seriously gave the Fourth of July a run for its money. Locals also released balloons for their deceased loved ones. Sounds depressing, but it was a sight to see.

We then went back into downtown Pescara where they shut down a square and had live music until around 2am. After that they kept playing music through the PA until 3 or 4 in the morning.

Since we’re in Italy, I obviously have to talk about the food.

Abruzzo is known as one of the best food destinations in Italy. In fact, foreign tourists have called Abruzzo the best region to eat in Italy.

Here you’ll find the staples like bread, pasta, meat, and cheese. But, you’ll also see some dishes that are more unique to the area. One of my favorites is Arrosticini, which is a skewered sheep dish you have as a starter. For a main dish one of my relatives made a homemade Timballo abruzzese. This is a large baked lasagna-like dish that’s out of this world.

Due to the proximity to the Adriatic, seafood is another delicacy in Pescara. The incredible fish are used to make broths and Scapece of Vasto, a fish marinade.

And, if you’re from the Philly area, then you have the people of Abruzzo to thank for favorites like porchetta, aka Italian roast pork, and pizzelle cookies – two of my all-time favorites.

Best of all? You get to wash all of these delicious dishes down with Montepulciano d’Abruzzo – which is arguably one of the best wines in the world.

After you’ve had your feast, talk a walk down towards the sea and stop into Bar Gelateria Berardo. It’s not just the best spot for gelato in town, it’s my favorite gelato joint in Italy. The pistachio is particularly outstanding.

Finally, if you want to check-out Split, Croatia, you can take a ferry from Pescara. Since the ferry only runs during the warmer months I haven’t done this trip yet. But, it’s definitely on my bucket list.

Getting to Pescara is relatively easy. There’s a train station so you can get there from any other region of Italy with no problem. If you rent a car, Pescara is about a two-hour drive from Rome. So, if you want to explore a less-touristy part of Italy, Penne and Pescara are worth the trip. But, I would say only if you’ve seen some other parts of the country. Because I have family there, it’s a no-brainer that I made the trek. And, I’ll continue to do so for as long as I can.

$2,000 (this was a ballpark for my entire trip both times). This can fluctuate depending on when you go. If you visit during the off-season you can snag a room at the Hotel Alba (side note, this is a cool older hotel that has some interesting artwork on the ceiling) for probably under $100 a night. Even though it’s a chain, there’s also a Best Western that has a phenomenal staff that’s affordable. That price is going to surge during the summer though.

2 thoughts on “A Tale of Two Cities: Penne and Pescara”