The Emerald City didn’t disappoint. Between the amazing northwest fare, countless micro-brews, interesting attractions & hip neighborhoods, Seattle has a little something for everyone.  I traveled there for the first time to attend a friend’s wedding; spending most of my time in the Freemont/Ballard neighborhoods. I also had an opportunity to visit a majority of the downtown area including Pioneer Square, Queen Anne, Pike Place Market & Capitol Hill and enough time for a day trip to Mount Rainer.

The famous Space Needle from the Chiluly Gardens

We took a cross country flight from Ronald Reagan National Airport in DC to Seattle-Tacoma International Airport with United Airlines. We rented a vehicle for our stay due to some of the activities we had planned. There is a light rail and bus system that can take you to various locations within the city limits. Lyft, Uber and cabs are options as well. We rented a small 1 bedroom/1 bath through Air BnB in the Freemont section of town.

The Market rests against Elliot Bay near downtown Seattle. Pike Place market almost went out of business in 1986. It was then that the owners realized they needed to change their ways if they wanted to be “world famous”. Legend has it as a prank, one of the employees tossed a customer’s fish across to the checkout clerk before getting wrapped up for sale. It became such a spectacle, the market continued doing it. The rest is history as they say. That is when the iconic fish tossing became part of the experience.

Hand for scale for the size of this lobster tail

Upon entering be on the lookout for Billie the Piggybank. She is a large pig statue that greets guests while collecting change for the Pike Place Foundation from willing customers. The fish market, Seattle Aquarium & Great Wheel are some of the attractions you’ll find along the way. This is a great spot to walk around with shops and restaurants on every corner. It tends to be pretty crowded, but there is enough going on that you don’t feel too overwhelmed. If you want some views of not only the Olympic Mountains but Mt. Rainier, then be sure to check out the Marketplace Plaza. The plaza overlooks Elliot Bay & the Seattle waterfront.  There is a Pike Place parking garage located on 1531 Western Ave. If the garage is full there is plenty of parking on most nearby streets. If you don’t mind a little walk, I believe this to be the best course of action.

One of the highlights of the trip was our visit to Chihuly. The garden & glass exhibit displays the famous glass work of Dale Chihuly. Chihuly is a native to the Seattle/Tacoma region. His work is included in roughly 200 museums worldwide. The exhibit opened on May 21st, 2012. It is located in the Seattle Center near the Lower Queen portion of town, adjacent to the Space Needle. Chihuly started a series of glass works exhibits in gardens all over the world. Starting in 2001 he had exhibits in Montreal, London, San Francisco, Boston and Chicago. 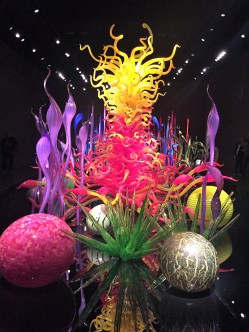 The amazing works of art

There are literally hundreds of glass works inside the exhibition. The center piece is the glass house which is 40 ft. tall glass & steel structure covering 4,500 ft. In total there are eight galleries & three drawing walls which display momentous pieces of his work. This is a very neat exhibit certainly worth seeing while on your trip. As a matter of fact trip advisor currently has it as the #1 sight to see while visiting Seattle. 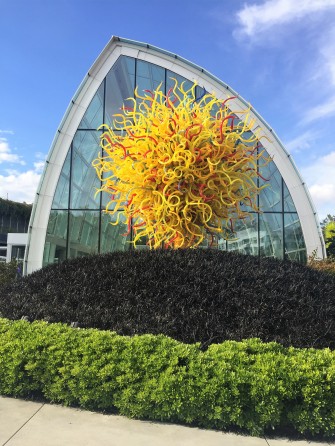 Part of the outdoor gardens

If you’re looking for a nice spot to take a run or walk, look no further. Located at the west end of Salmon Bay near the Ballard neighborhood are the Ballad Hiram Chittenden Locks. Construction on the Washington ship canal & Chittenden Locks was completed in May of 1917.  I have since been to the Panama Canal, so I’ve seen arguably the most famous locks in the world. But these locks were pretty impressive to see nonetheless. The Carl English Botanical Gardens lead you up to the locks with walking paths. So you’ll be accompanied by many other trying to get a work out in. You can cross the canal via the locks over a bridge as well. There is actually a fish ladder integrated into the locks to allow migration of salmon to pass through. 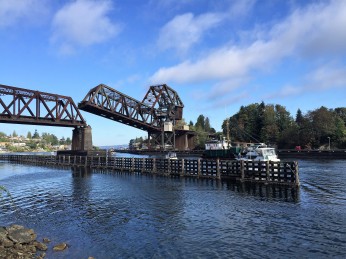 Arguably the most recognizable attraction in all of Seattle, the Space Needle is at the very least something you should take a picture of. It is the centerpiece of the Seattle skyline. As mentioned previously it is adjacent to the Chihuly Gardens. So a perfect duo of activities to knock out during one of your days while visiting. Wait times will vary but within 45 minutes we had purchased our tickets and made out way to the top. On a clear day you can get an amazing shot of Mt. Rainier. The Iconic needle stands 605’ tall and was built in 1962, designed by artist Edward Carlson. His vision of the design came by way of a sketch on a napkin one night and was  intended for the upcoming Seattle State Fair.

Views from the Top!

Dubbed the “original neighborhood” Pioneer square dates back to 1852. PS is at the center of the Seattle downtown; sandwiched between Chinatown, SODO & Central waterfront. There a tons of bars, restaurants, art galleries & shops to keep you busy. Century Link & Safeco Field are just a few blocks to the south making it a perfect location to visit prior to a game at either stadium.

As a national park enthusiast I made it a priority to get to Mt. Rainier. Just 60 miles away it makes for a perfect day trip when visiting the Seattle area. Mt. Rainier is the 5th highest peak in the continental US and 17th highest overall standing at 14,410 ft. above sea level. Mt. Rainier is also the most glaciated peak in the contiguous US. The active volcano actually spawns 6 major rivers. Annual park passes are $50. But if you’re just planning on a day or week long trip to the park its $25 total vehicle. 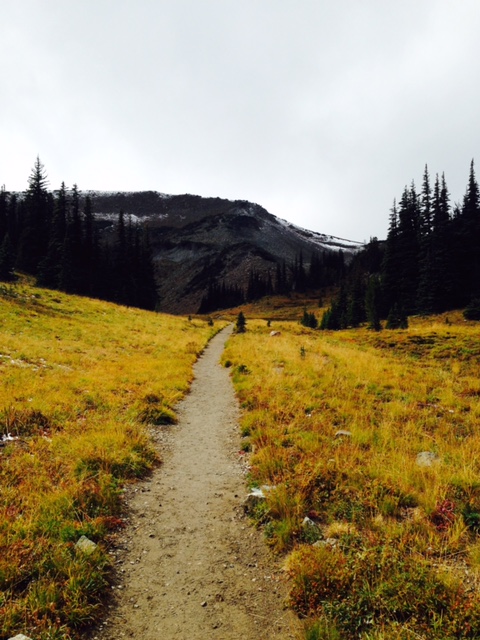 There are 5 major locations/trails to visit while in the park; Sunrise, Paradise, Longmire, Ohanapecosh & Carbon River-Mowich Lake. During our visit we went to the Paradise section of the park, which is where the main entrance is located. There are countless walking trails taking you through beautiful wildflower meadows. This is also the most popular spot to visit in the winter when an average of 643 inches fall per year. Many enjoy cross country skiing, snow-shoeing & tubing during the winter months. Sunrise is another area that you should include on your trip. It is the highest elevation (6,400 ft.) that you can reach by vehicle. Much like Paradise there are many trails in which you can traverse once you’ve reached the parking lot. I would recommend both a rain jacket & coat when visiting the park during the summer months. Due to the elevation changes the weather patterns can change with essentially no warning. 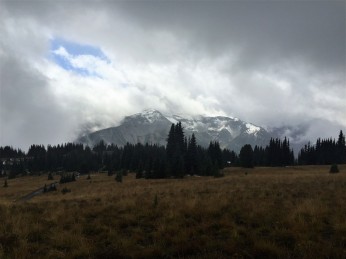 Beechner’s Handmade Cheese: We were told by our friends that live in the city to check out Beechner’s Handmade Cheese. It is located on 1600 Pike Place. If you like cheese, it’s the place to be. There is a variety of options including but not limited to; grilled cheese, mac n cheese, sandwiches, wraps, soups & pretty much every type of cheese you can think of. Be sure to check this place out when you visit Pike Place Market.

Westward Restaurant: This restaurant was actually recommended by our Air BnB host. And it did not disappoint. It is located right on Lake Union with an incredible view of downtown Seattle. Matter of fact outside the restaurant there are fire pits & nice lounge chairs for you to sit back and take in the views. The restaurant is situated in such a way that each seat has a unique view of the lake & city skyline. You can actually arrive by boat or kayak if you please as well due to the access to a 100’ dock. The menu includes popular northwest eats such as wood oven roasted rainbow trout, pan seared black cod & clams.

Breweries: Widely considered a top 10 microbrew city in both quantity & quality, Seattle lived up to the billing. Specifically, the Ballard neighborhood is rising up the ranks as a micro-brew hot spot. Ballard now has more breweries than any neighborhood in Seattle or Portland. If you’re in the area and are thirsty I highly recommend Stoup or Reuben’s. They’re located about 2 blocks from each other and provide plenty of beer options along with food trucks.

Stoup- They do not serve food here, but have a rotating food truck schedule for each day of the week. Check out their site as it changes from time to time. Featuring 13 beers on tap they’re bound to have something for everyone. The brewery was started by a couple that were later joined by a mutual friend who now serves as one of their brewers. If you’re an IPA fan this is a must stop as literally half their beers on tap are IPA’s. Some of my favorites were the Psycho Tropic IPA & the Northwest IPA.

Reuben’s Brews- Boasting 12 beers on tap, Reuben’s is another great stop if you’re in the Ballard neighborhood. Virtually all of their beers have won awards at various beer contests over the years. But two of their more consistent award winning brews are the Bourbon Barrel Aged Imperial Stout & Robust Porter.