Overall Experience: As of December 2017, I’ve been to 21 countries. Visiting Greece is still my favorite trip. I think I became completely enthralled with it because of its historical significance, romanticized mythology and everlasting contributions to modern life. Walking amongst the ruins of the Acropolis was the thrill of a lifetime. After all this time, the ancient buildings still stand as a testament to the cradle of  Western civilization. Athens is a global city relishing in its storied past. In that spirit, this post highlights some of our favorite classical era monuments and absolute must sees when visiting the city.

Constructed during the 5th century these monuments are still some of the most important in the world. It’s almost a sacred experience to walk through the temples dedicated to the city’s patron goddess, Athena. There is so much to see and be wowed by that I recommend setting aside at least a day to tour the site. Don’t forget to take in the views of the beautiful sprawling city!

The Acropolis rises almost 500 ft above the city and covers seven acres across the top of this famous hill. What remains today was not actually the original set of buildings. There were temples in progress in 480 BC  which were destroyed by Xerxes’ Persian troops. The sites still present today were built after Xerxes forces were defeated to celebrate and glorify the city. Just to be clear, I was walking around a site where the biblical Xerxes may have been present. If that doesn’t blow your mind, I don’t know what will! 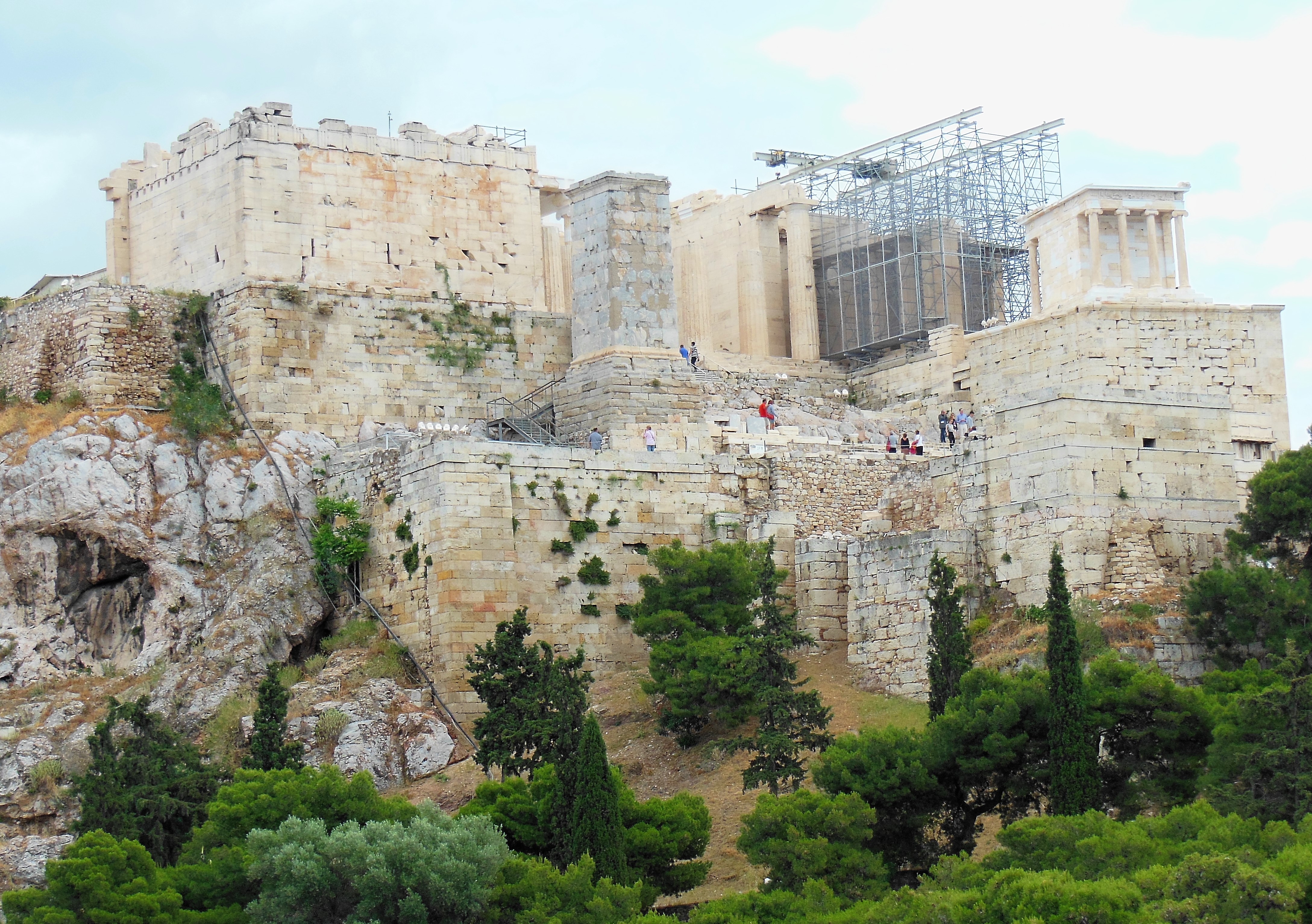 The main sights at the Acropolis include, the most famous being the Parthenon, the Temple of Athena Nike, the Erechtheion, the Propylaia, the Dionysus Theater and the Herodes Atticus Theater. Additionally, once you are finished touring the site, you can learn and see even more artifacts at the New Acropolis Museum.

Pass through the grand entrance of the Propylaia to the Temple of Athena Nike. This temple is dedicated to the goddess of victory and featured a variety of Nike relief sculptures in different activities and poses.

Continue on to the Erechtheion, which was considered the most sacred temple of the Acropolis. On the south porch, the roof is supported by six draped female statues known as the Caryatids or “Porch of the Maidens.”

Next, walk to the main event, the Parthenon! Bask in its splendor, classical architecture and centuries of history.  Originally it was dedicated to the Goddess Athena, it featured a giant statue of her made of gold and ivory.

In later years, it served as a church, mosque and a place to store gunpowder. This last purpose almost destroyed the entire structure when it was shelled by the Venetians in 1687. Since that time it has undergone numerous large-scale restorations beginning in 1975 and finished in the summer of 2017. If you visit today, you may finally see the Parthenon without scaffolding.

As you walk down the backside of the Acropolis, you’ll see the two theaters the Herodes Atticus, which was built in AD 161 and hosts summer festivals. The Dionysus Theater is significantly older and featured plays by famed Greeks, such as Sophocles. You can still see names carved in the marble seats, reserved for the Dionysus priests.

Finally, head into the New Acroplois Museum which was opened in 2009 and has incredible views of the Acropolis as well as glass floors over an early Christian settlement. It features the marbles found in the Parthenon, numerous priceless statues of Athena, and the previously mentioned Caryatids.

The Temple of Olympian Zeus

Visible from the Acropolis and just as incredible, the Temple of Olympian Zeus has 15 standing columns and one laying across the field accentuating the dramatic historical imagery. The  temple lays in an open field and you can walk right up to the incredible columns and explore the area. 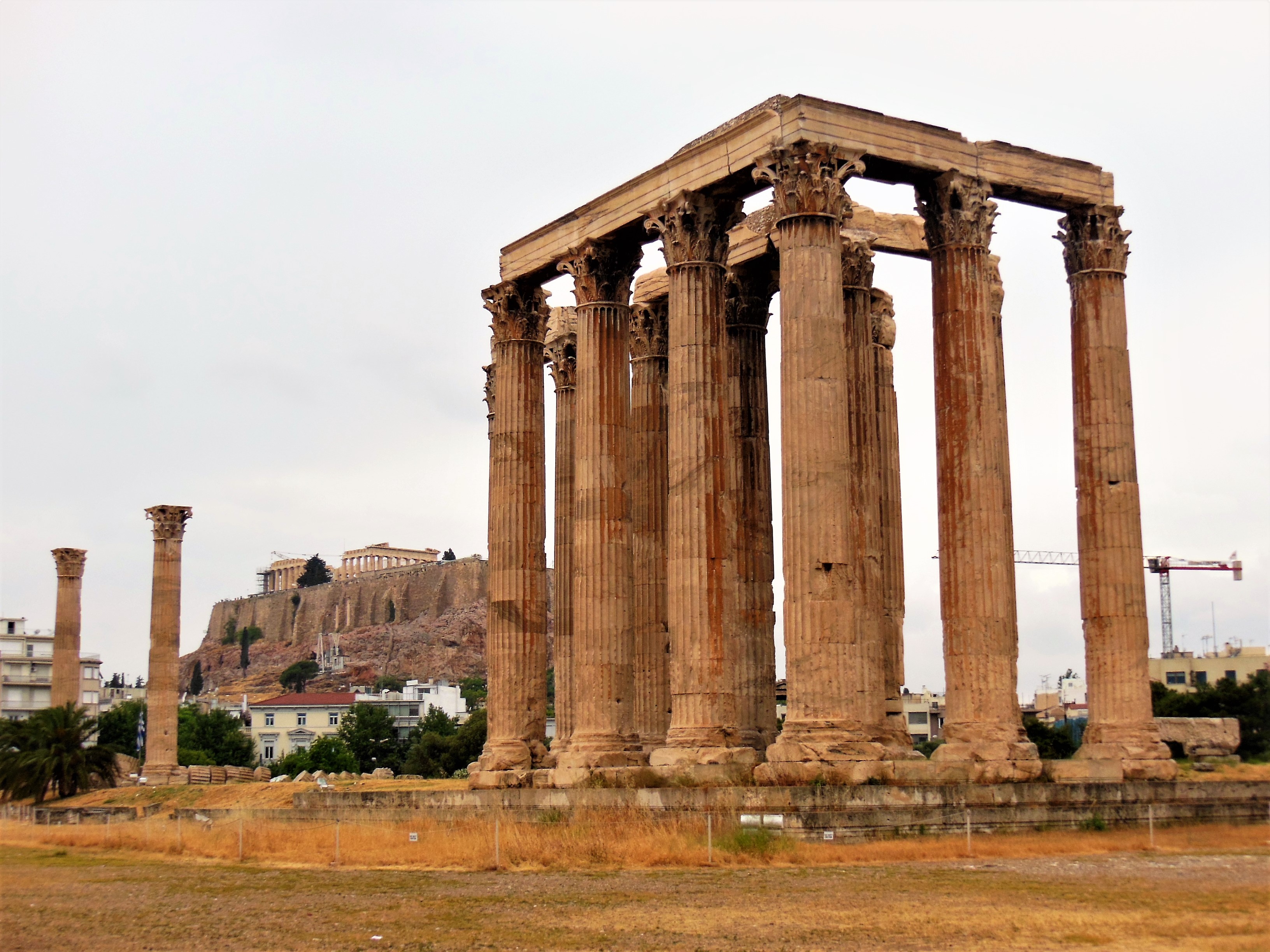 While construction began in 515 BC, it stopped and started multiple times and was  finally completed in 132 AD and dedicated to Zeus. At its completion, it was the largest temple in ancient Greece with 104 columns standing over 50 ft tall which created an inner chamber inside of which were two statues, one of which was a replica of the statue of Zeus created by the famous Greek sculptor Pheidias as well as a statue of the Emperor Hadrian. 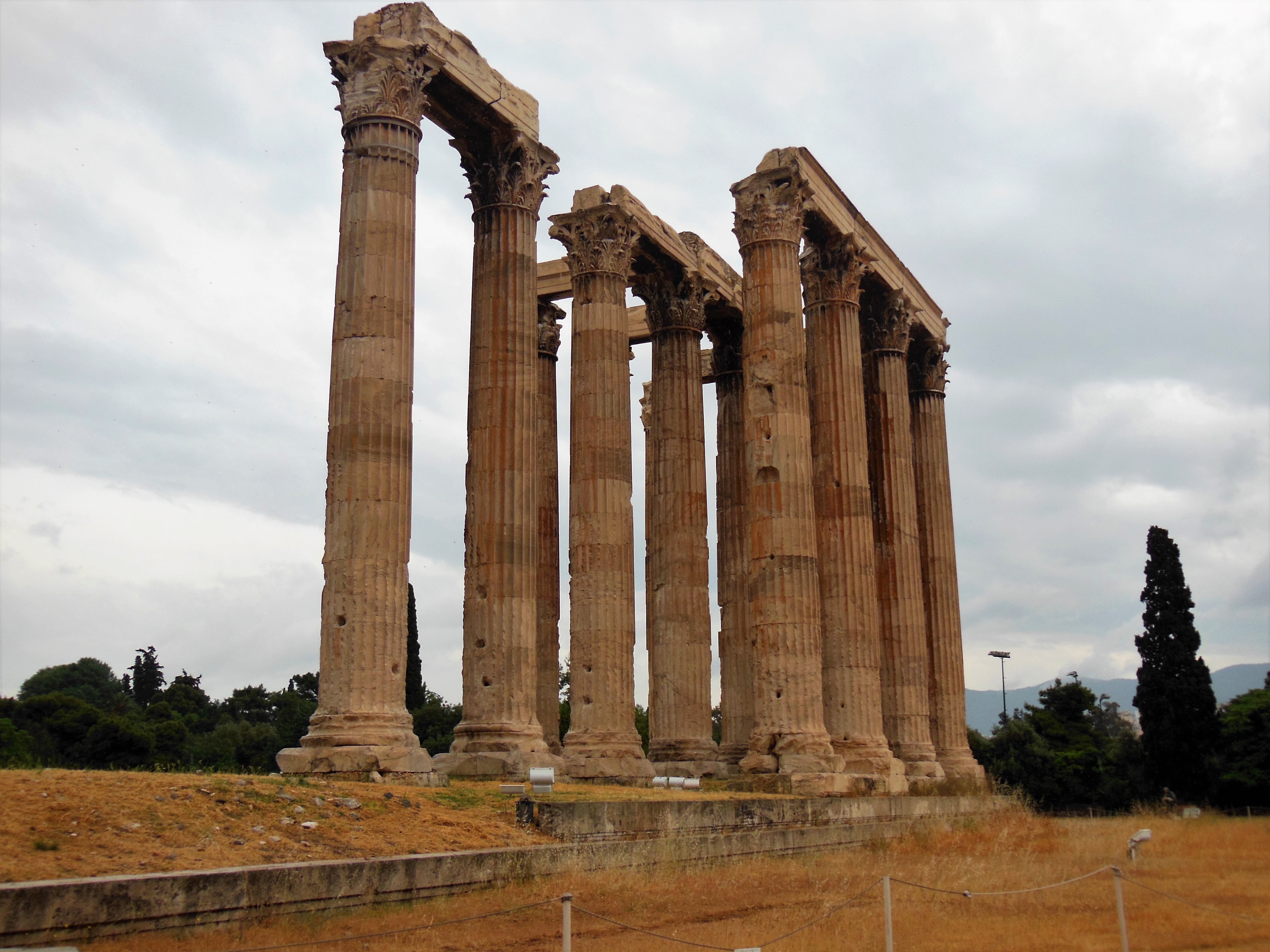 Located northwest of the Acropolis, the Agora has been called the birthplace of democracy. It was a busy marketplace since the 6th century BC and was the heart of the city for over 1,200 years. More than just an outdoor market, this area housed civic buildings, a mint, athletic competitions, and it’s also where the most renowned philosophers taught, including Socrates and Aristotle. Now, there are interesting ruins scattered throughout a large grassy area waiting to be explored!

One of the main sites is the Temple of Hephaestus, which is almost pristinely preserved. Hephaestus was the son of Zeus and Hera and was the god of fire, metalworking, stone masonry, forges and the art of sculpture. He’s often depicted with an anvil and tongs and as the blacksmith god, he made all the weapons for the other gods on Mount Olympus.

Across from the Temple is the Odeon of Agrippa, which was a theatre built in 15 AD. Agrippa was a government official of the first Emperor Augustus. There are still three statues standing guard out front; two Tritrons, messenger gods from the sea, and one serpent tailed giant.

Finally, check out the Agora Museum. Built around 130 BC, it was the Stoa of Attalos named after the King who directed its construction and served as a beautiful two-storied shopping center in the Agora. It was reconstructed in the 1950s by the American School of Archeology and today displays all of the artifacts found within the Agora, including sculptures of Nike and a Spartan shield.

This guy needed a nap after touring the Agora Museum

In the first century AD, Athens moved from the old Agora to this smaller but grander location. Its most famous monument is the Tower of the Winds, which is a large octagon shaped tower built in 50 BC by Syrian Astronomer Andronikos Kyrrhestas. It features friezes of the eight wind gods, has eight sundials and was used as a clock tower. Additionally, the area around the tower used to be a cemetery and you’ll see plenty of the Byzantine Grave Markers still remarkably intact.

Another prominent site here is the Gate of Athena Archegetis, which frames the western entrance to the forum. It was constructed in the 11th century by Julius Cesar and Augustus and dedicated by the people to the Goddess Athena.

Once the edge of the ancient city, Kerameikos was a cemetery for both the city’s statesmen and common people, with the more prominent citizen buried along the Street of Tombs. Since it also featured two entrances to the city, through the Diployon and Sacred Gates, it was a popular locale for prostitutes to offer their services to weary travelers.

The site is shaded and off the beaten path so it’s not over run with tourists. You can see parts of the ancient walls and walk through the Oberlander Museum, which features pottery and tombs found in Kerameikos. There are a few famous steles, or grave markers, including the Marble Bull which was the tomb of Dionysios of Kollytos and a tomb of a young girl with her pet dog. 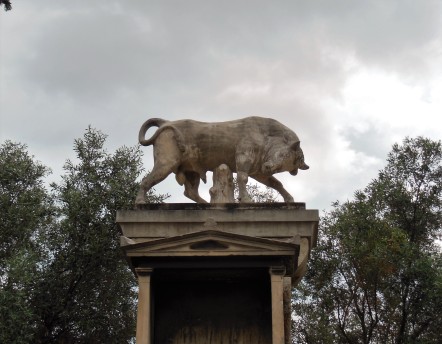 Not only will a hike to the top of this shaded park provide incredible views of the Acropolis but it also has its own fascinating ancient ruins.

View from the Hill

Near the top is  the “Filopappos Monument” which is a tomb dedicated to a Roman senator named Gaius who loved the classic Greek culture and retired and died in the city in AD 114. 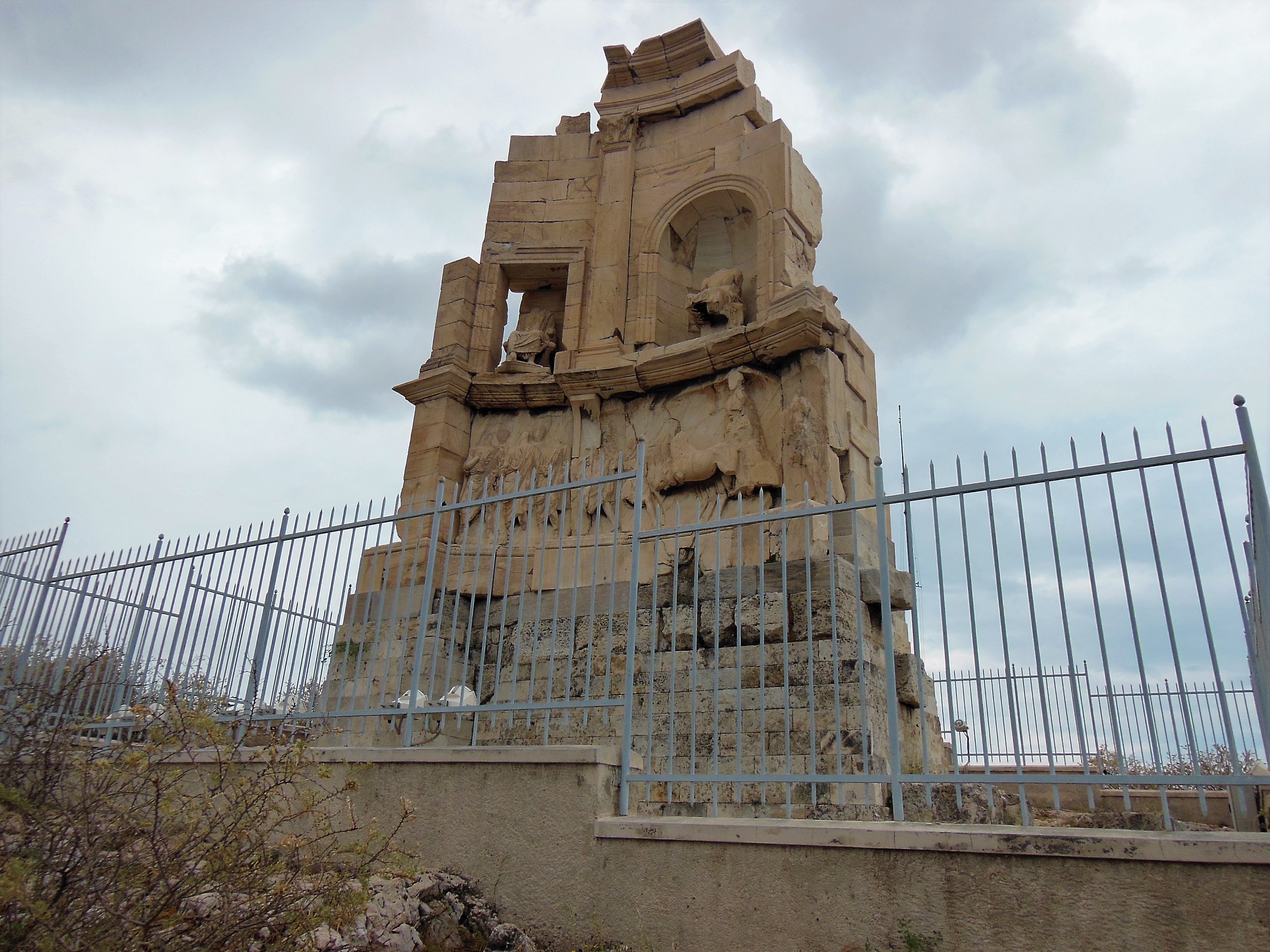 Another impressive site is the cave where Socrates was imprisoned. He was the original philosopher in the Agora and had many devoted students. Unfortunately, that devoted following was the reason charges were brought against him. Socrates was charged with corrupting the youth of Athens and sentenced to death in 399 BC. 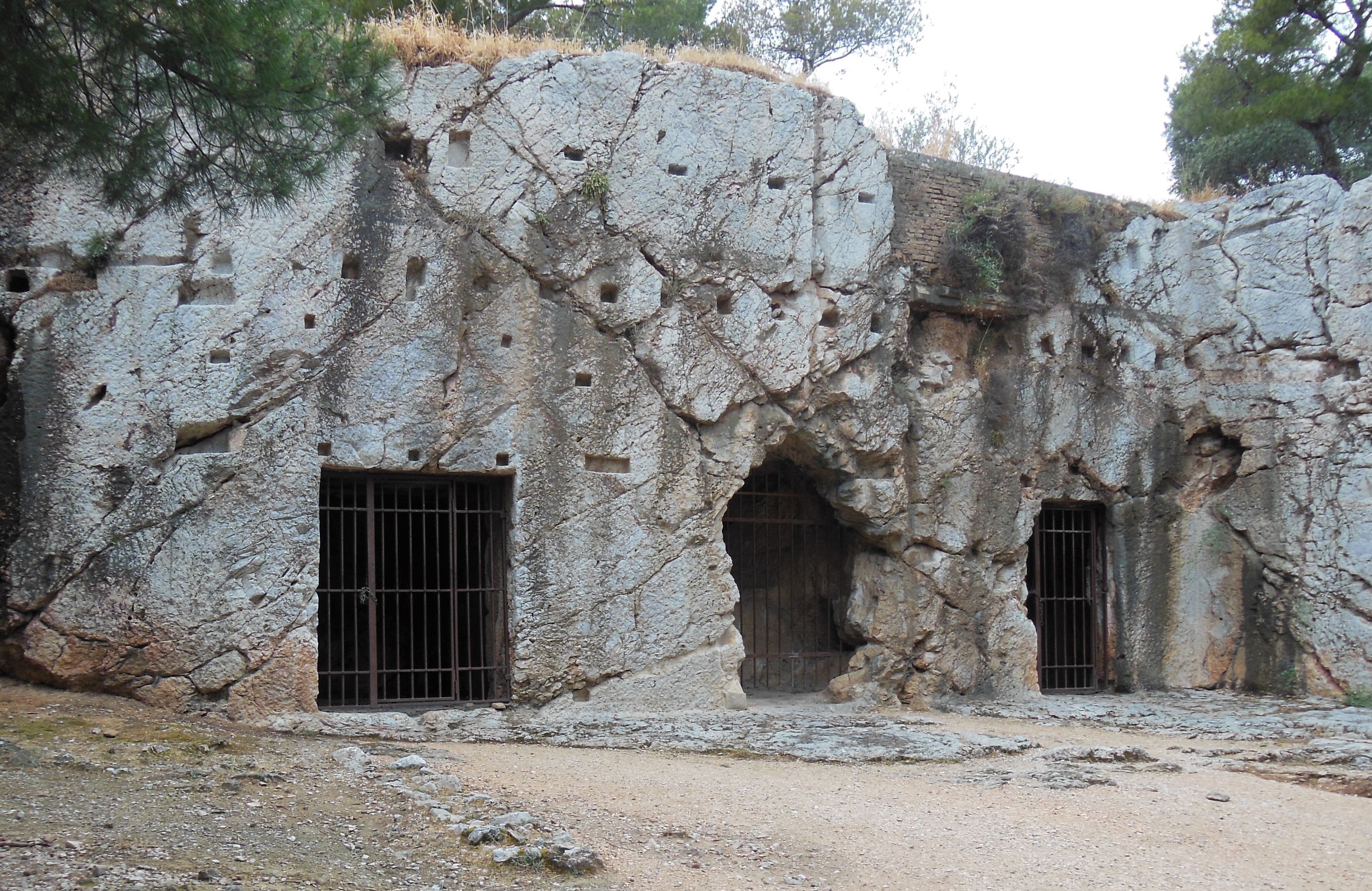 1). Athens has a phenomenal metro system. It’s cheap, clean, and efficient. You can reach the majority of sites via the easy system and you’ll see mini archeological displays throughout the metro system of things archeologists discovered while the lines were being built.

2) The admission to the sites range in fees but most are under 10 euro. You can always purchase the Acropolis ticket for 20 euro (10 in winter) which includes multiple sites or get an all inclusive pass that ranges from 30-120 euro and includes metro and bus fare.

View of Athens from the Acropolis