Overall Experience: My favorite trips are the ones where I can combine the best of both worlds. During my recent trip to Prague, I spent most of the time wandering through the cobblestone streets and getting caught up in the hustle and bustle of the city. However, I love getting away for a day to  go to the beach or the mountains. Fortunately, I found a great tour company, Northern Hikes, that runs day trips to Bohemian Switzerland National Park, just under two hours from downtown Prague!

I booked the 10 hour/10 mile hike about a month in advance for 165 euro per person. The tour included pick up and drop off, tour guide, lunch, boat ride and entrance fees. The local tour guide, Vojta, scooped us at our hotel at precisely 8:25 in the morning on the day of our reservation. We piled into the van, which had free wi-fi, and joined two other couples for a full day of adventure!

After riding out of the city and through the plains, we parked the car and stretched our legs! Vojta handed out our snacks and water and gave us an overview of the park. Bordering Dresden, Germany, the land was given the status of national park on January 1, 2000. It was named by two Swiss artists who said the scenery reminded them of their home in Saxon Switzerland.

We started uphill towards the famous sandstone arch and got a sense of the quiet forest and the peacefulness of the area. There is actually a small plaque on a tree to commemorate the day a noble women was riding her horse through the trail and fell off. That was it. Everyone was fine but it was the most notable event at the time so it had to be remembered. 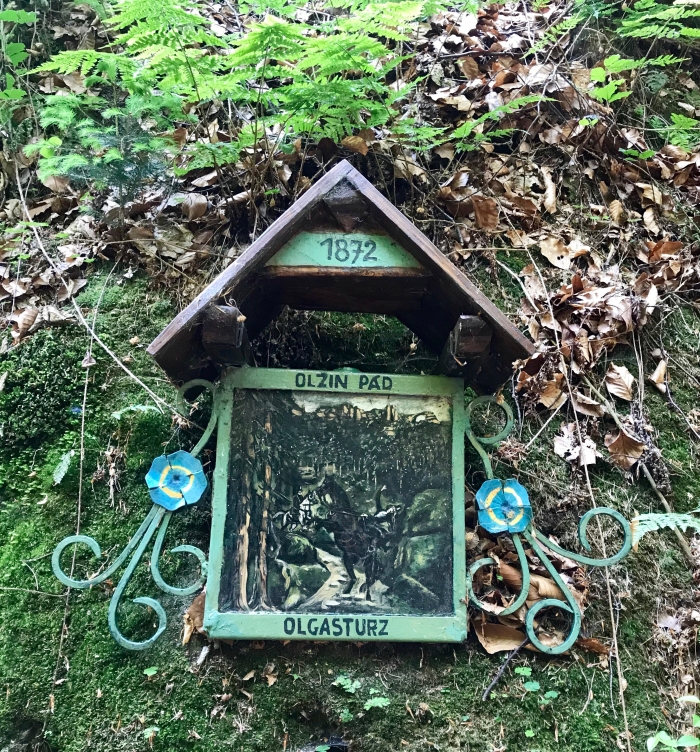 Continuing on, the looming Falcon’s Nest Hotel begins to peek out of the trees. Built in 1826, directly next to famed Pravcicka Gate. The Hotel was built by Prince Clary und Aldringen but today it serves as a restaurant and bathroom stop to hungry tourists. There’s also a tiny souvenir shop where you can pick up some woodworking items. 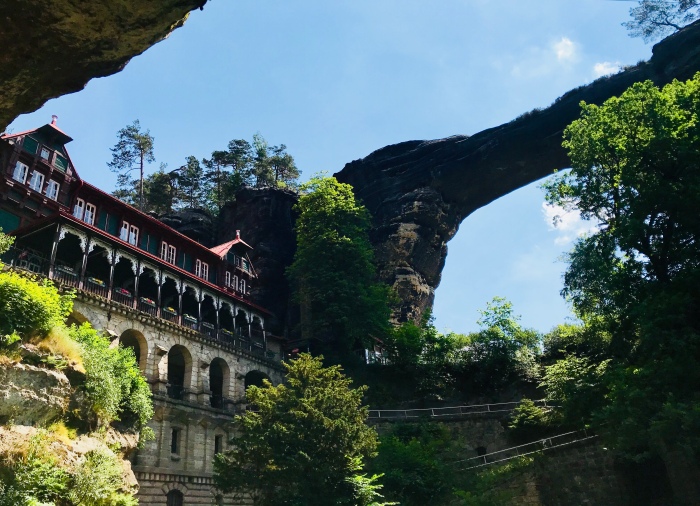 To get to the arch, just pay the entrance fee and walk up the well maintained but steep steps. Due to heavy erosion, visitors are no longer allowed to walk across the arch but there are incredible viewpoints where you can see the largest sandstone arch in Europe in all its glory. 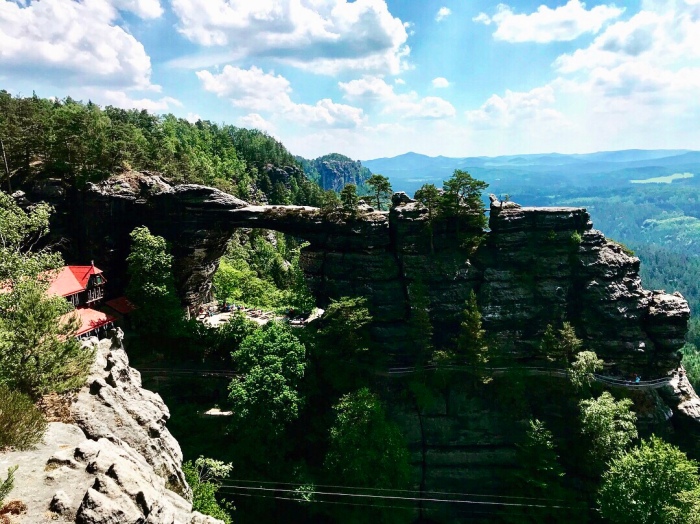 The dark green forest seems endless, you can actually see Germany to the right, and the wind is typically whipping around while you enjoy the views!

After we took enough photos to fill an album, we ventured back down the steps and enjoyed a snack at the picnic tables underneath the arch. Vojta entertained us with hiking adventure stories, his own farm, and the history of the site. We started down the mountain and on a path called Gabrielle’s Woods. It’s named after the mischevous sister of the original owner who liked to venture out and explore the forest.

After about a two hour walk down through the shade and rolling sandstone mountains, we made it to the restaurant, U Forta, for lunch. The menu and servers mostly spoke Czech and German so it was great to have Vojta to provide translations and recommendations. We sat outside and swapped stories with the other travelers and ate the best meal we had in Czech! We tried the gnocchi and tenderloin with some local pilsners and did not leave a drop behind! 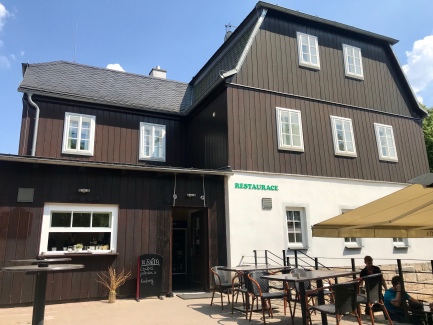 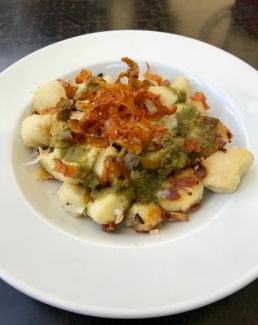 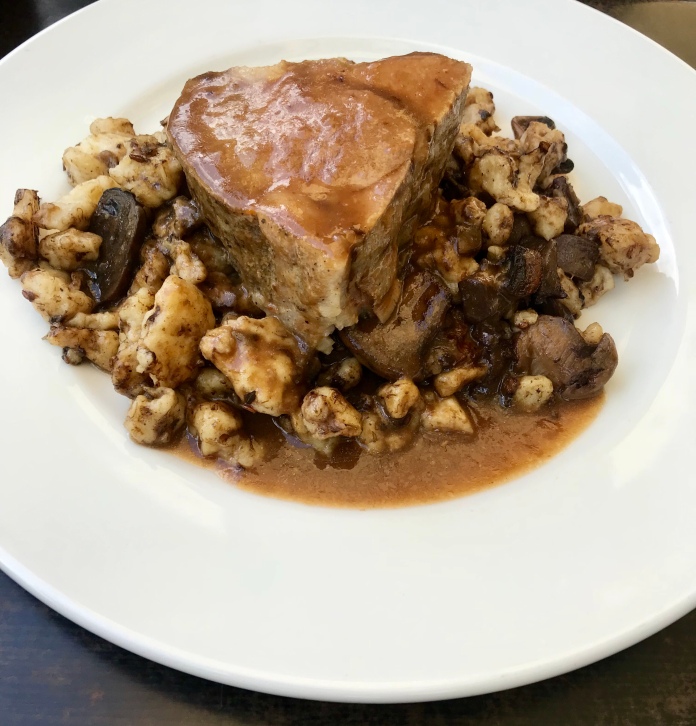 After the delectable meal, we continued our hike through the outskirts of town and down to the Kamenice river to catch our dingy. The hike through the gorge is like a completely different environment from the sandstone cliffs. Everything is covered in green, the temperature is significantly cooler, and the river roars along the banks. It’s such a pleasant way to wind down the hike. Keep an eye out for all of the critters in the forest! We saw several of the bright blue Kingfisher bird. If you are hiking during the winter, look for river otters!

We got to the boats and waited a few minutes until we had about 20 people to ride down the river. The captain pushed us along with a pole and narrated in German about some of the unique rock formations including a gorilla, dolphin and Bart Simpson. Who knew? The ride takes about 20 minutes and you’ll shout “Ahoy” as you pass others along the way.

After the river ride, we were exhausted but content. We walked another mile back to the parking area where we climbed back into the van and promptly took a nap. Bohemian Switzerland National Park captures the romanticism of the great outdoors. The hike enables you to get out of the city and into the fresh air to explore more of the beautiful Czech Republic! 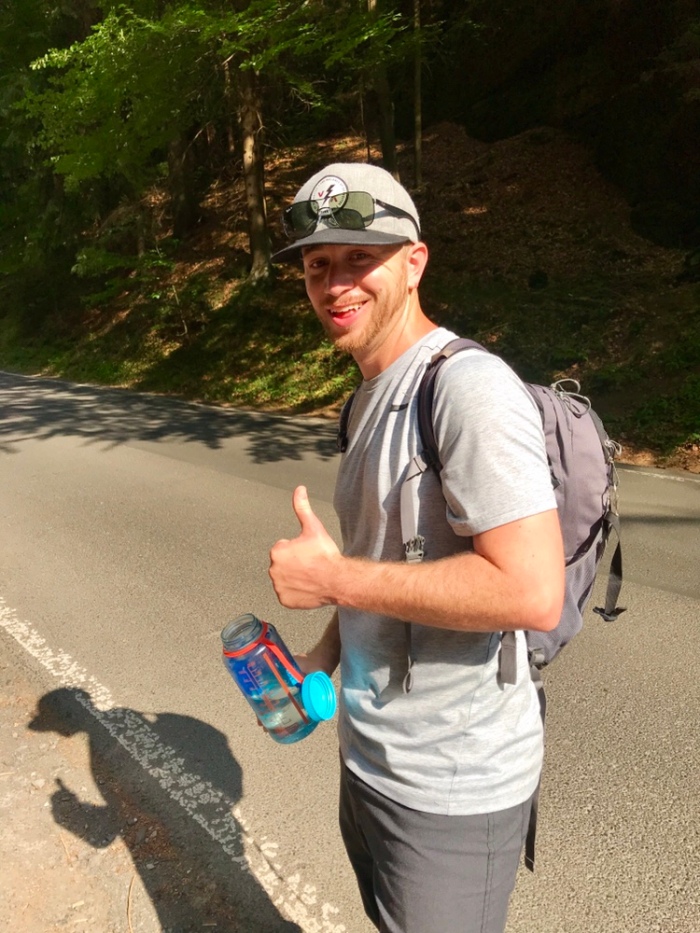