Washington, DC is home to almost 700,000 residents (who don’t have any voting rights in Congress) and a thriving arts scene. The district is chock full of creative artists sharing their gifts with residents and visitors through some pretty magnificent murals. We’re sharing our favorites so you can find them as you explore DC.

The MBT stretches eight miles from Silver Spring, MD to Union Station in Washington, DC. It’s popular with runners and bikers and follows the train tracks out of the city. They have a rotating series of murals sponsored by POW! WOW! Washington DC. 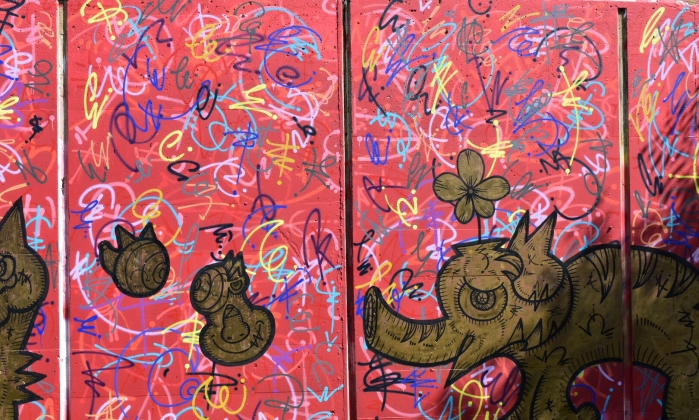 The murals along the MBT truly inspire your commute home. Here’s a quote from artist Garin Baker about his Lincoln Memorital mural on the route:

“When I started doing research, the story really started to unfold. I found a really symbolic story about America,” Baker said. “These workers’ souls and their hearts and their dreams are imbued in those stones. For an artist, it’s a good thing.” – Washington Post, Perry Stein

An unexpected neighborhood landmark, the Watermelon House was a result of a happy accident. The homeowners wanted their house painted fire engine red but instead got pepto bismo pink! Instead of crying over spilled paint, these amazing people made a watermelon, much to the delight of instagrammers everywhere! Check it out next time you are in Logan Circle. You’ll also find they added a kiwi sister mural.

The Watermelon House and Kiwi Fence of Logan Circle

In the anything but dark and quiet Bladgen Alley, Lisa Marie Thalhammer co-founded the D.C. Alley Museum.  It started in 2015 when a grant program commissioned a series of works by artists with a history in the neighborhood. Lisa created the “Love” mural in 2017 after the March for Our Lives in D.C.. She says “As an artist, I feel it is my job to reimagine a better world free of the toxicity that results from our current cultural love deficiency. Through the visual language of color and public art, I believe that yes, we can shift our psychology and create a more equitable world.” You can purchase Love prints in a variety of formats here.

“U Street” – The Greek Spot

Of course your cool pup deserves a photo shoot! World Travelers Union writer Kat Calvitti took her dog, Alan, to appreciate this vibrant mural by local DC artist duo, Mixed Scene. You can check it out for yourself at 11th and U street NW. 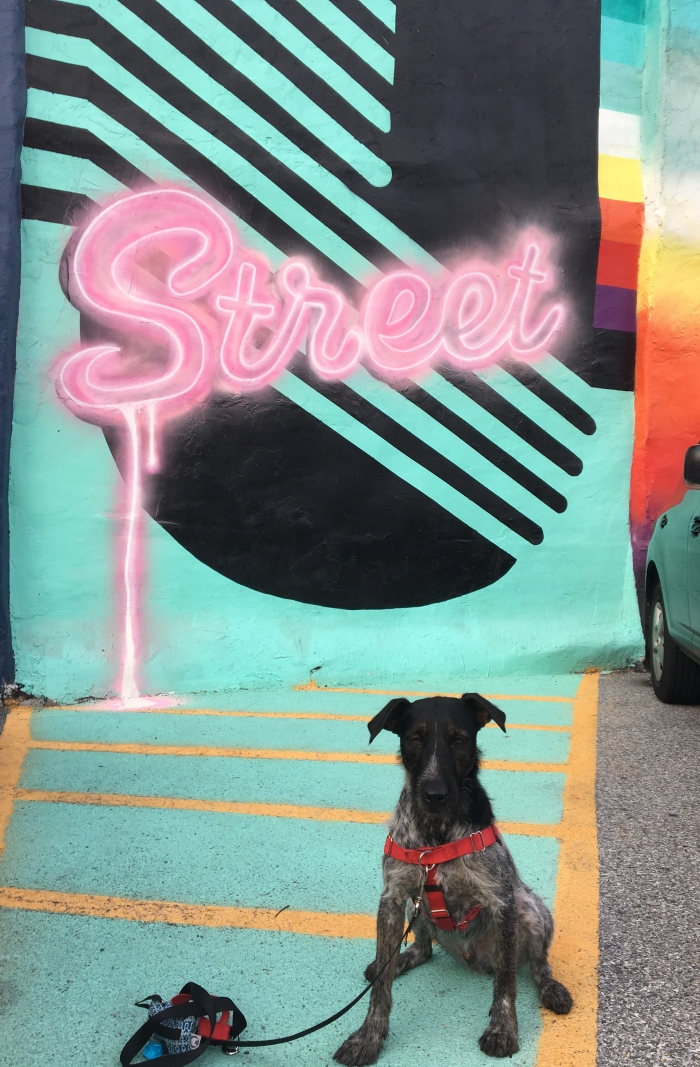 Located in a tiny alleyway at 1450 P St NW, this mural is three stories tall and part of a world-wide project to paint 10,000 Buddhas all over the world! This mural is a unique part of the project as it depicts the Buddhas in a multitude of skin tones and includes various religious symbols to reflect the diversity of DC. Welcome to the path of enlightenment!

Perhaps you’re not just thirsty for art but also want some of that famous chili? Head to Ben’s Chili Bowl on U street NW for a delicious, steaming bowl of the good stuff and then enjoy the view of some of D.C.’s most famous residents including Dave Chappelle, Taraji P Henson and Eleanor Holmes Norton, a civil rights and feminist leader and the city’s non-voting Congressional member. 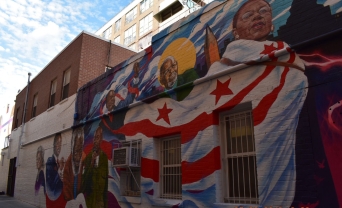 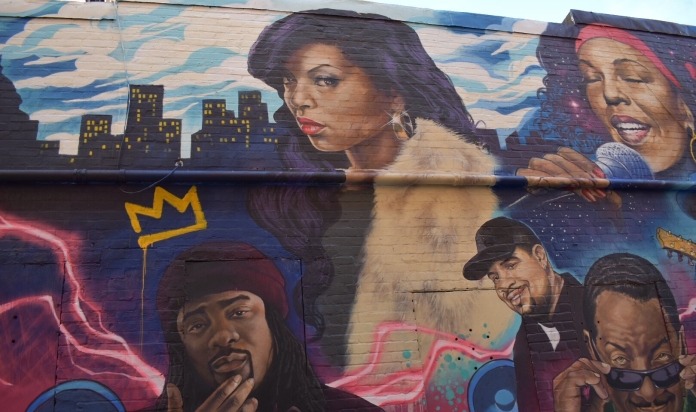 Located on Florida Ave and 1st NW, this side alley mural highlights the importance of Woman’s Suffrage. It features Mary Church Terrell who was a prominent journalist, writer, educator and activist. She taught at Washington DC’s Dunbar High School and was the first African-American woman to be appointed to a school board in a major city.

Muralist – Unknown at this time

This is one of my favorite festive murals and the inspiration behind my future life as a tropical beach bar owner! The Wild Flamingos mural can be found on Florida Ave and 8th St NW, alongside the 801 Restaurant & Bar in the Shaw neighborhood. 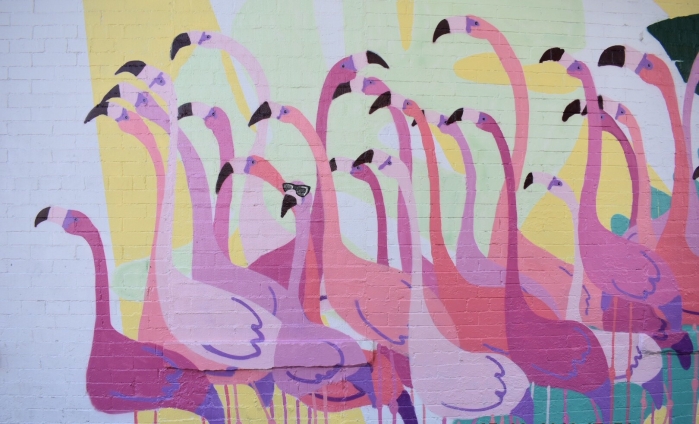 Muralist – Unknown at this time

A popular neighborhood hangout on Q and 7th NW, Dacha Beer Garden debuted this glamorous mural of the Elizabeth Taylor in 2013. She overlooks the patrons as they down a frothy beer from a boot and munch on delicious brats and pretzels. However, Liz is more than just a pretty face! The mural commemorates her work and support of the Whitman-Walker Health Center, which helped to prevent the spread of AIDS and provided treatment to those affected by HIV/AIDs.

Union Market is one of the best places in the city to take advantage of a variety of delicious and affordable food.  Make sure to walk around the back of the building towards the Dock 5 space to see some of the murals created by famous artists including Yoko Ono and Mr. Brainwash, who is rumored to be Banksy himself! 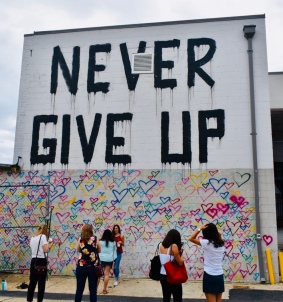 Never Give Up by Artist Mr. Brainwish

Located on S street NW between 7th and 8th, a tribute to DC’s own Marvin Gaye lights up the brick work. Bring your soulful pup to pose and croon with the late musician! You might even meet Stella the Spy there! 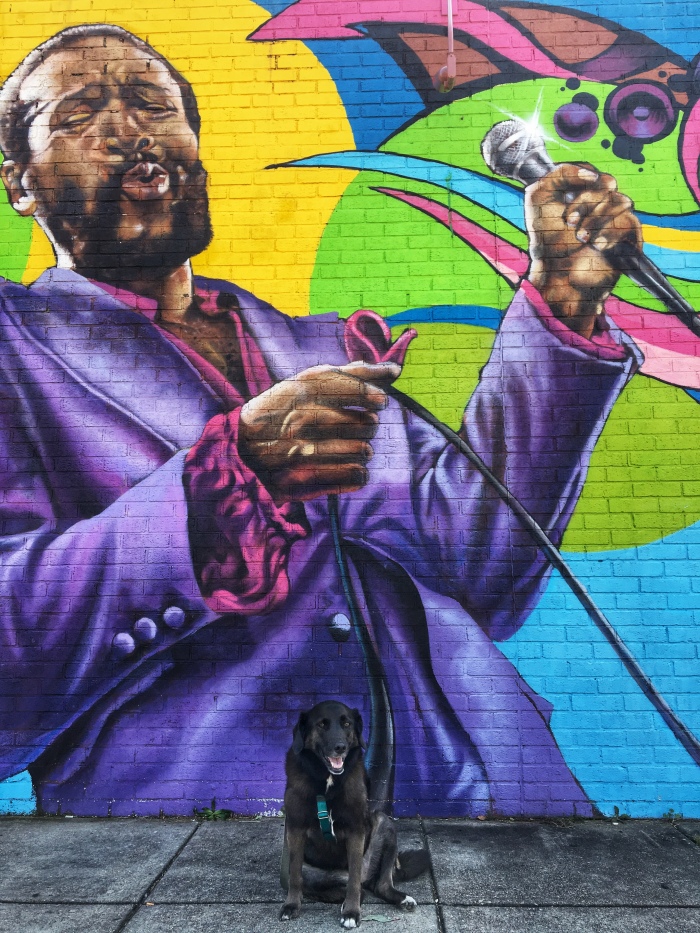