Welcome to the lowest point on the planet! You can’t get lower than this unless you bring a shovel! Nestled in the picturesque Jordan Valley, the Dead Sea sparkles against the mountainous back drops. The views are staggering as the valley stretches for miles east to west. Not only is the scenery pleasant but this is an area of biblical and historic significance!

Welcome to the Dead Sea!

Even with a storied past, the present day politics are unavoidable. The lights of the West Bank light up the night sky while during the day the barbed wire fencing doesn’t look as inviting. Additionally, the walk to the Dead Sea water’s edge gets longer and longer as the sea dries up due to irrigation changes. Unless the countries bordering the sea can come to an agreement and soon, the Dead Sea will be gone forever.  An avoidable tragedy which will hopefully have a resoultion so future generations can experience this place. 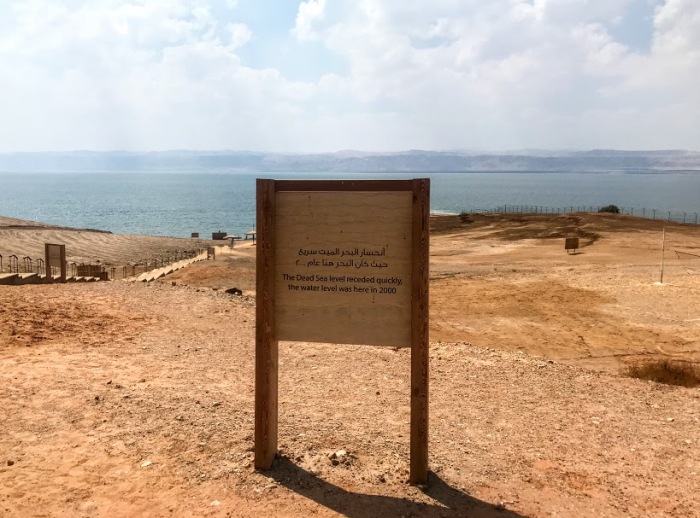 Just a one hour drive from Amman and three and a half hours from Petra, the Dead Sea is located in southern Jordan. Close enough for a day trip but better to stay overnight, the Dead Sea is the best place rest and enjoy a spa treatment.

We stayed at the Dead Sea Spa Hotel which featured an expansive breakfast buffet, multiple pools and direct access to the Dead Sea. The resort also boasts a wellness center where licensed health care professional provide all sorts of skin care treatments, especially if you are one of those Europeans who has health insurance which covers such a trip! We enjoyed the food, nearly wept at the beautiful sunsets, and spent some time at the on site pub swapping stories with other adventurous travelers.

Other than that, there is no night life to speak of in this area. I suggest making friends with the bartenders.

The lowest point on Earth is also scorching hot. If you thought the water would be refreshing, you would be wrong! It’s borderline jacuzzi temperature and you really can’t swim per se, as you don’t want the water to get in your eyes, nose or mouth.  So a lazy float is the only option. It’s quite delightful and the novelty of the weightlessness doesn’t easily wear off! 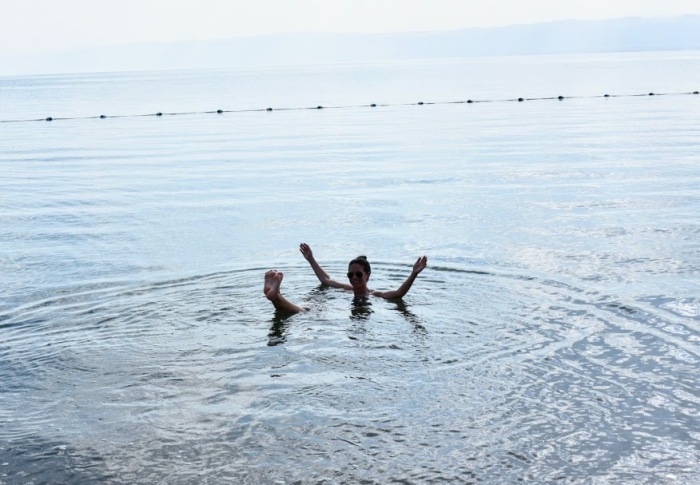 Despite the heat, the Dead Sea is great for the fair-skinned. A natural phenomenon occurs where an additional layer ​caused by the high rate of evaporation in the atmosphere filters out the harmful rays of the sun creating a favourable UVA/UVB ratio. By no means are we saying skip out on the sun screen, but it’s nice to know you have an extra layer of protection.

Tips for the Water 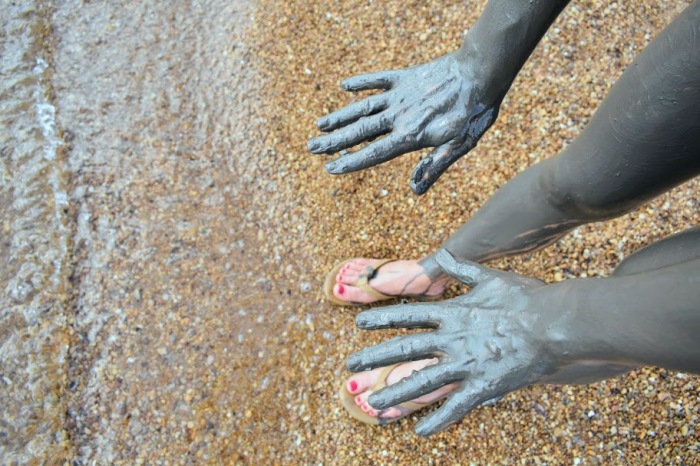 The Baptismal Site of Jesus

Just a 15 minute drive from the Dead Sea Resorts stands the Baptismal Site of Jesus. The biblical importance of this area to believers can not be overstated. It’s said here is where the Prophet Elijah ascended into heaven on a chariot and John the Baptist did his work, including baptizing Jesus. The area remained a popular pilgrimage destination until the 14th century when the area was no longer safe to travel through. This theme continued on and off over the years until it became demilitarized in 1994 when Jordan and Israel signed a peace treaty and subsequently all of the land mines were removed.

Today, you can take a bus tour of the area for 12 JD with a guide. The first stop is Prophet Elijah’s Hill where you can see the city of Jericho in the distance and three churches; Coptic, Armenian and German. The next stop is where Jesus was actually baptized. There is a four pillar covered structure over a depression in the ground which you reach by walking down a few stone steps. Unfortunately, there is no water at this spot today as it has been diverted by a damn. It’s a little difficult to imagine the rushing water of the past when you’re surrounded by all of the dry grass and cracked mud. 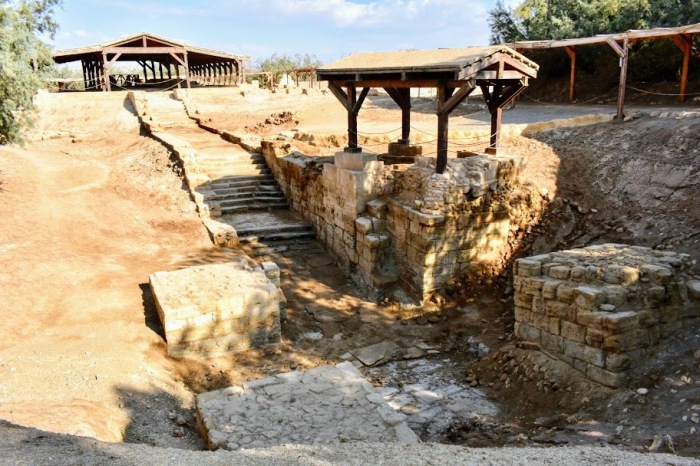 The third and final stop is the new path of the Jordan River. There is a beautiful chapel at the site with bright frescos and a covered patio next to the river for those who want to dip their fingers or toes in the muddy water. Directly cross the river, I’m estimating maybe 20 ft, lies Israel where you will see lots of guards and multitudes of people getting off buses to get baptized in the famed rivers.

Chapel at the river

It’s a little peculiar observing all of the activity from the quiet shore of the Jordan side but if you are in the area I highly recommend visiting this historical location.

Getting Baptized on the Israeli side

Mount Nebo is the famed biblical site where God showed Moses the Promised Land. After fleeing persecution in Egypt and wandering the desert for 40 years, God had Moses climb this ridge where Canaan was spread out in all directions before him. As the story goes, God then gave Moses the bad news and told him he would never get to enter this land. Moses died soon after and his burial site is rumored to be around here but has never been located.

The views are indeed spectacular, especially for the bargain price of 2 JD. The valley seems to stretch forever and in the distance you see the faint lights of Jericho and Jerusalem. No wonder people wanted to settle here! The scenery isn’t the only item of interest. There is a small museum detailing the history of the site and the tiny Basilica of Moses, built over the 4th century foundations of the original church, featuring a few priceless mosaics depicting an assortment of animals.

The water in the springs originates from winter rainfalls in the highland plains of Jordan and eventually feeds the 63 hot and cold springs in the area. This water is heated to temperatures of up to 145 degrees farenheit by underground lava fissures. There are public swimming areas at the Ma’in Spa Resort where you can dip into the few scalding pools and sit under the waterfall while reaping the benefits of the therapeutic waters. It’s 15 JD for a day pass and there is an area with picnic tables where you can enjoy your lunch.

Believe it or not, there is a shopping mall located near the resorts. The Samarah Mall  isn’t a high end shopping center, but they do have a pharmacy stocked up with some luxurious Dead Sea skin care products! They are much cheaper here than at the hotel spas. Additionally, there are quite a few road side stores that sell these skin care goodies. The shop owners we met were incredibly friendly, happy to chat and even provided coffee!