Ah, road trips!! The American dream. The pinnacle of freedom. The hallmark of youth… until you have kids of your own, that is. And then any extended trip by car is like driving with a stick of dynamite in the backseat. To children, especially the tiniest variety, a motor vehicle is not a method of transportation, let alone a worthy means of exploring the world. It is a cage; a tight confined space complete with uncomfortable straps that causes instant bouts of claustrophobia and at its worst, tantrums and even vomiting. While car travel may be my least favorite method of travel with kids, sometimes it is still the most practical given the time restraints and the anticipated terrain. So how do you achieve harmony against what seems to be impossible odds? Sit back, relax and I’ll tell you what I learned on our first road trip abroad with a baby around the North Island of New Zealand.

Connect the Dots with Google Maps

Road trips with kids take strategy. I went into the planning stages of our trip to New Zealand with this harsh reality in mind. When you become a parent, the free spirit within must be tamed for the sake of sanity. Rule Number One: Reel it in! I wanted to see ALL of New Zealand. I still do. But considering that a ride to the grocery store was a gamble with our unpredictable pre-toddler, I knew we had to approach this trip with a strategic mindset. We only had a week before moving on to our next destination of Australia and I didn’t want to burn myself out, or anyone else, in the process.

After some hesitation, I narrowed our journey to the North Island instead of trying to tackle the whole country. While I had heard marvelous stories about the South Island, it struck me as more of an adventurer’s mecca and frankly, I wasn’t about to go glacier-climbing with a baby on my back. Not yet, anyway… The North Island with its rolling green hills, whimsical attractions and quirky natural wonders seemed more our pace. (Ironically, we would soon discover that the speed limit even in the rural parts of the North Island was up there with the Indy 500, but I’ll get to that a little later. )

To help plan your next road trip, there is a quick and easy method on Google Maps that I like to call “Connecting the Dots”.  Here’s how it’s done:

So let’s put the “Connect the Dots” method in motion, shall we?

Ok I’m lying. It was triple the length. However, the reality you must accept as a traveler and especially as a parent is that time is the most precious commodity and sacrifices must be made to ensure you make the most of it. In fact, we cut out about half of THIS list too and ended up with a final itinerary that looked like this: 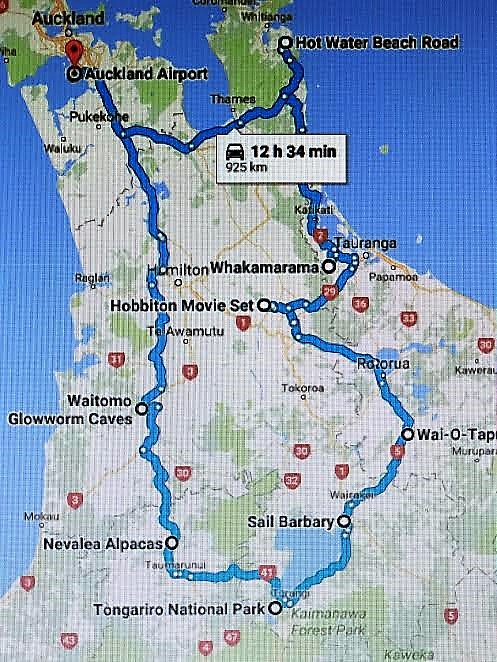 Hiring a Campervan in NZ

We had our map. Now we just needed a vehicle. Can I confess that I am a hippie at heart? I have always felt that I should have been born in the sixties, a flower child, crossing the country in my painted Volkswagen. You can imagine my delight, then, when I discovered a rental company called “Wicked Campers” that provides vintage vans complete with colorful paint jobs. Alas, my dream would come true… well, sort of…

My anticipation was sky high. I had visions of peace signs and hearts spread amongst a rainbow of tie-dyed flowers dancing in my head. Instead, we ended up with this fine piece of machinery…. 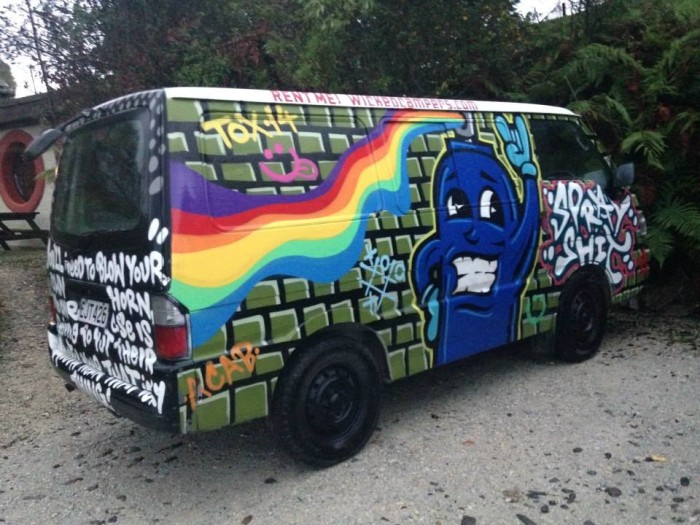 Pictured: Not what I had in mind

(Internal dialogue: “What in the world?! Is than an alien? Well at least there’s a rainbow. Oh and, look at that, some nice vulgarities written across the back”…)

It’s ok – you can laugh! We did… eventually. Nevertheless, I wasn’t about to let this minor (ok, major) miscommunication put a damper on the mood. We got into the vehicle and were again caught off guard – the tank was completely empty!

(More internal dialogue: “Deep breath. No worries. We’ll just stop for some gas… in a new city… in a new country… with different road rules… where they drive on the opposite side of the road… but it’s ok, you see, because at least there’s a sticker on the dash reminding us: “Stay Sexy, Stay Left”….)

The whole scenario was so ridiculous that by the time we got out of Auckland, we couldn’t help but laugh to cut the tension. As if driving 120 km per hour on the opposite side of the road in a foreign country isn’t stressful enough, try doing it in a flamboyant, borderline vulgar vehicle sure to catch the attention of everyone on the road including local police.

Final verdict? While, in the end, we grew a fondness for our “wicked camper” it would be a stretch to call it family-friendly. Besides obnoxious, it was old, dirty, uncomfortable and on every hill, felt as though it was fighting for its last breath. However, it was certainly a conversation starter and provided endless laughs throughout our trip. Plus, whenever we noticed another one on the road, we took the opportunity to give a hardy honk and a shout out the window: “Stay Sexy, Stay Left”. The absurdity of it all still makes me giggle. Somehow we survived, without ticket or incident, and for the memories in that beast of a van, I am forever grateful.

Prefer to play it safe? Rent another Campervan:

We covered a lot of ground during our week on the North Island of New Zealand. What follows are just a few of our favorite, family-friendly activities:

I wish I could show you the incredibleness of the Waitomo Glow Worm caves but it’s just one of the world’s many wonders that simply cannot be captured on camera. Our guide got a kick out of my feeble attempts but, as he repeatedly tried to tell me, it’s like trying to take a picture of the stars. A perfect analogy because that’s exactly what it looks like as you drift by raft beneath thousands of softly glowing strands of light dangling from the roof of a dimly lit cave. It is truly awe-inspiring scene and the silence which suddenly came over the boat was testimony to the sense of wonder we all felt.  Although there are several companies in Waitomo that run tours of the Glowworm caves, Spellbound Tours attracted my attention with its many favorable reviews.  After meeting at their office, our small group of ten traveled by bus all along gorgeous rolling green hills before descending down a winding path between the mountains by foot. Lunch was included as were safety helmets. At $75 NZ dollars, per person, it may seem a bit steep for a cave tour but don’t be dissuaded – it’s well worth it. Despite the hype, it didn’t feel the least bit touristy and instantly became one of the highlights of the entire trip.

Alpacas; distant cousin of the llama and arguably one of the cutest, yet silliest-looking creatures on the planet. What is it about these lovable lawnmowers that bring an instant smile to my face? In a country where sheep outnumber people, I guess it should come as no surprise that animal farms are all the rage and alpacas have become a favorite for breeders. At Nevalea Alpaca Farm, visitors have the opportunity to get up close and personal with these delightful creatures. After a brief informational session, you are free to mingle with your new alpaca friends at your leisure. You can feed them, snap a selfie, cuddle a baby and even take them for a walk on leash. Yes, apparently, alpacas are the “dogs” of the livestock world – who knew?! Which reminds me… I think our pups at home could use an alpaca sibling…. 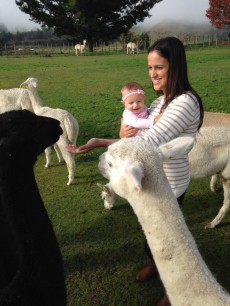 Ready for another confession? I have never seen the whole Lord of the Rings trilogy. *Gasp*  I know, I know.. but c’mon, at 3+ hours a movie, a marathon would cost me nearly an entire day of my life. Ain’t nobody got time for that! Nevertheless, from what I have seen of the films, there was one place I didn’t want to miss on our trip to the North Island of New Zealand. I’m talking, of course, about Hobbiton – the village of tiny underground holes that the hobbits called home.

Disclaimer: Hobbiton is a movie set. Sadly, there are no actual hobbits living there. While many of the hobbit scenes were filmed on-site, you cannot actually go inside their adorable little houses. In fact, you are pretty much forbidden from touching any of the scenery or props. I’m sorry to crush your dreams. However, if it’s any consolation, you CAN proceed to the Green Dragon for a pint to drown your sorrows – and I highly recommend it.

Overall, I’ll admit that Hobbiton is super-touristy but still a day well spent, especially when traveling with a pint-sized companion who would fit right in if only there really existed a village of real-life hobbits. 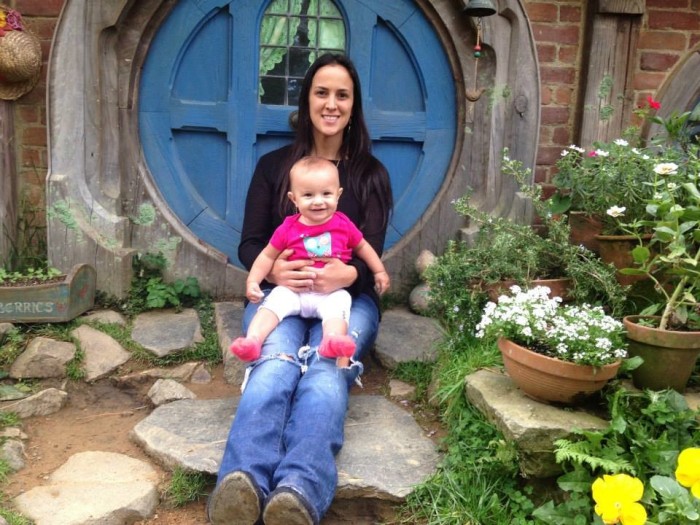 The original plan was to sleep in the campervan during our travels around North Island. For obvious reasons, that idea was immediately dismissed upon arrival. After reading about Hobbiton, my inner child took over. I really, really wanted to stay inside a Hobbit House. Lucky for me, there was someone else on the North Island of the New Zealand who shared this same vision. Introducing – Woodlyn Park. An array of childhood-dreams-turned-into-reality-type of accommodations which include a ship, a plane, a train… annnnd a hobbit hole! 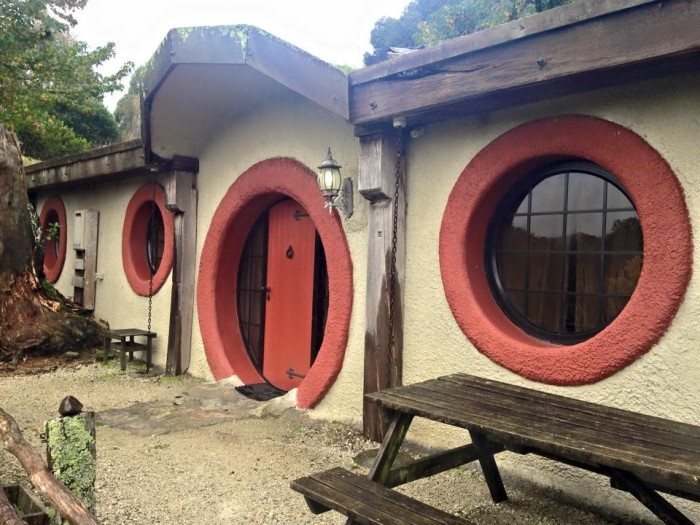 Now I should explain that most of “hobbit-ness” is featured on the outside of the hotel. Like Hobbiton, the structure has been carved into the rural landscape and comes complete with the signature round doors and windows, similar to its “middle earth” counterparts.

Inside, the furniture is rustic but modern and thankfully, it’s all sized to normal human proportions.  All in all, it still requires a stretch of the imagination but, for us, the simple thrill of living underground made the whole experience worthwhile. 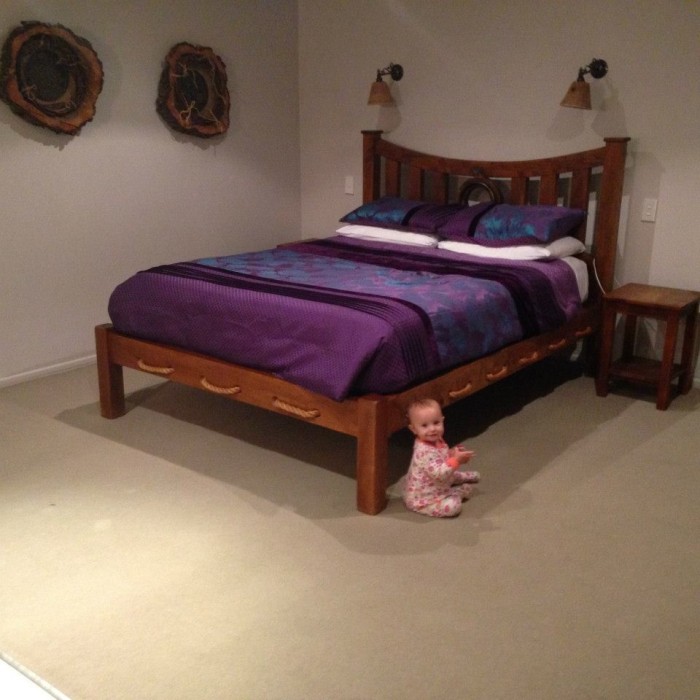 There’s a deep sense of nostalgia when I think back on our road trip around New Zealand. Something about it reminds me of my childhood. Maybe it’s because they still air reruns of Step By Step and Full House. Or it could be because the fashion is very 90s grunge and they still play David Bowie and Led Zeppelin on the radio. Maybe it’s because we made this journey in a “wicked camper” painted with weird cartoon characters or all the silly, whimsical activities like cuddling alpacas and pretending to be hobbits. Whatever it is about New Zealand, I fell head over heels in love! And as far as family vacations go, it just may be my all-time favorite. Until we meet again, my dear New Zealand: “stay sexy, stay left”.