Overall Experience: We loved seeing the more unconventional, less visited, parts of France. We were able to explore a lot of historic aspects and at the same time experience the amazing French cuisine, which greatly varied by region. 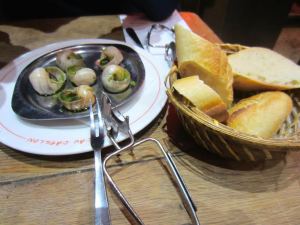 We planned most of our trip based on the regions we wanted to visit and used the 2015 edition of Rick Steves’ France guidebook to plan out the specifics. The guidebook was very helpful planning our route, getting around from town to town, and it provided a high level overview of what we could expect once we got there.

Logistics: We flew into Paris, explored the city, including visiting the Louvre, and spent the night there. Early the next morning we boarded a train to Marseille where we switched to a regional train heading east toward the French Rivera – Nice (About 5 hours on the train). After our time in the French Riviera, we rented a car and drove to Arles, and used that as our base camp while exploring Provence.

I now understand why the expression is that people “backpack” through Europe. The public transportation and city areas are not handicapped or suitcase friendly, so my suggestion is to pack light, and if you must bring a suitcase, use the smallest one you can find!

Head south out of Paris to Arles

If I were to do it all over again, I would skip Paris all together, since I have been there several times, and fly directly to Nice.  There is something about the charm of Southern France that is so special and unique, while Paris, at least to me, is very similar to other big cities I have visited.

Hotels: Hotel Massenet (Nice), Hotel d’Arlatan (Arles); both hotels were recommended in the Rick Steves’ guidebook. We were very happy with the location of our hotel in Nice, as it was a close walk to the “Promenade des Anglais”, which is the main street right along the coast of Nice, with lovely views of the Riviera. It was also a relatively short walk to Vieux Nice.  Our hotel in Arles was one of a kind. The rooms were very historic and charming (it was built on top of an old Roman villa), and the ambience was very much in-line with the charm of the town.  Hotel d’Arlatan is also a stone’s throw away from Café Van Gogh.

Activities: We started our trip in Paris, but I will skip to the good stuff – the time we spent in the French Riviera and Provence.

Taking in the views in Nice

Nice (pronounced like “niece”) was gorgeous; it had a modern feel and breathtaking views. There is a region called “Vieux Nice” (Old Nice) which has the historic charm people expect from France – this is also a great place for a romantic dinner. My husband tried several different variations of the local favorite, the Nicoise salad, and he really enjoyed it. We used Nice as our base camp in the Riviera. Each day we would take the regional bus north-east along the French Riviera coast to explore different cities. The bus is very affordable, I believe less than 2 Euros per person, and offers great views along the coast. 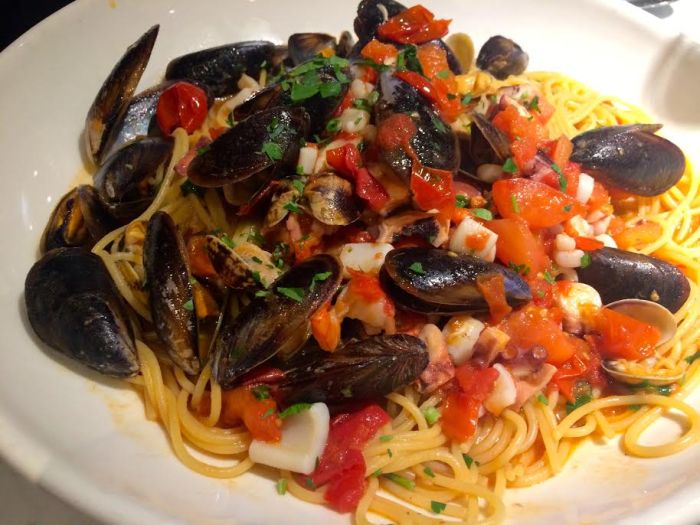 Try the mussels in Nice

We spent one of the days exploring Monaco, which is only a 30 min bus ride away from our starting point in Nice. Monaco was definitely one of a kind; the amount of wealth and luxury packed into such a small country was unimaginable. Most of the vehicles driving around were Bentleys and Rolls Royces, and the shopping scene was definitely of the high-end variety. My husband stopped by the Monte Carlo Casino, which I believe came with a 20 Euro entrance fee just to walk around, and something like a 200 Euro minimum to play.  We went up to the top of the hill, where the Prince’s palace is located, and the views did not disappoint. This is also a nice area to do some souvenir shopping and take a tour of the palace grounds.

View of the beautiful country

One of our other days in Nice we took the bus to Eze-Bord-de-Mer and decided to hike up to Eze-le-Village, located at the top of hilltop. Although I am very glad we accomplished this, I want to caution anyone else taking this on, as it is a legitimate hike. It takes about 45-60 minutes to climb up; the path is well defined but the terrain is not very even, and there is no shade from the sun. If you are not interested in an intense hike, you can take a bus up to the village. Once again, the views from the hilltop were picturesque and well deserved after the climb.

I saved my favorite town on the French Riviera for last, Villefranche-sur-Mer, which was a hidden gem along the coast. Villefranche was much less touristy, located about half-way between Nice and Monaco. Since there weren’t many tourists around we were able to get a better feel for the true Riviera life and experience authentic local food. There is an ancient castle in the center of the city, dating back to the 1600s, that was pretty interesting to explore.

The beautiful gem of VilleFranche

After our time spent in the swanky French Rivera, we continued on to the more humble region of Provence, well known for good wine, sprawling countryside and well-preserved Roman ruins. Our base was Arles, a tiny town known for a very famous resident, Vincent Van Gogh, in his later years. The roads of Arles are more narrow than I thought possible; luckily, once we parked the car at the hotel, we were able to explore the entire city by foot. Along with the many Van Gogh markers pointing out the inspiration for Van Gogh’s most popular paintings, there were also a lot of historic sites, such as the Roman Arena. The arena, which was used over 2,000 years ago for gladiator fights, is still operational and is currently used for corridas (bullfighting).   We also went underground to the “Cryptoporticos” which was an ancient Roman market, but now resembles a cave with intricate Roman arches and pathways.

Driving is not easy on these narrow streets

From Arles, we took a day trip to Avignon, which I really enjoyed! As we drove up all we saw was a huge Roman wall surrounding the city, but once within the city wall, Avignon proved to be a modern, thriving city.  Although not without some trouble, we also drove to the “Pont du Gard”, a truly beautiful site. This is a huge bridge over the Gardon River. Originally built as a Roman aqueduct, Pont du Gard is completely intact and beautiful when the sun hits it just right. The grounds around Pont du Gard highlight what Provence is all about – lush countryside, vineyards and olive trees.

One other town we visited from our home base in Arles was the city of Nimes.  Nimes, like other places in Provence, features ancient Roman ruins and old world French charm, but is still a modern, vibrant city in its own right with great shopping and unique restaurants.  Like Arles, Nimes has a Roman Arena that is still operational to this day, and when we there, they were building a huge archaeological museum next door. 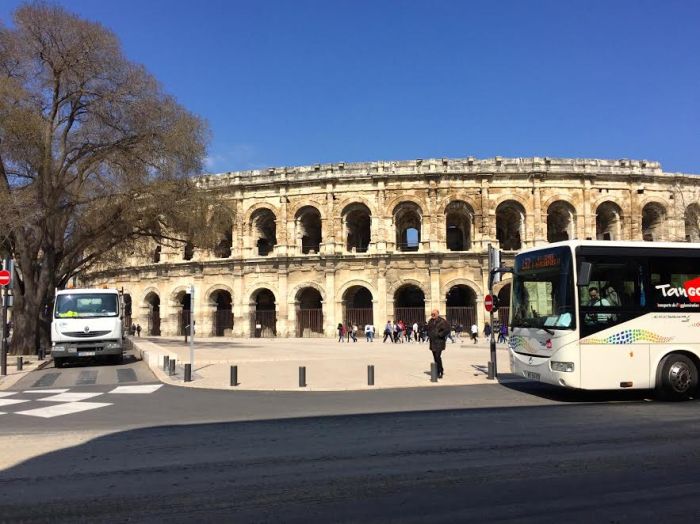 Each morning, we indulged ourselves starting off with an éclair or a croissant from a local patisserie.  We told ourselves we could justify it with all the walking around and exploring we had planned.

Overall, the cuisine in the French Riviera is heavily influenced by Italian cooking, due to its close proximity to Italy.  Since I love both French and Italian food, this was a great combination in my opinion! We found some great places to eat in Vieux Nice, so you can’t go wrong with whereever you choose. Although, it’s very much on the touristy side.

Surprisingly, my two favorite eateries were in Provence, both in the small town of Arles. The first being a family owned restaurant called “La Gueule de Lupe”. You truly feel like you are enjoying a meal in a family’s living room. We could see the kitchen from our table, so that was a special experience. The food was a little out of the box, and I believe the menu changes quite frequently, but you can taste the joy and pride in local ingredients and French country cuisine with every bite.

My second favorite was a place called “Restaurant Jardin des Arts”, an Italian restaurant which features both Italian and French country cooking. We had a blast eating out on the beautiful patio, drinking delicious local Rose and eating amazing food!