It was November 9, 2016 – aka the day after election. My best best friend and I were still in disbelief. But, life must go on.

My friend had to speak at conference in Lexington, KY, so we packed-up the car and drove southbound. Thankfully, we got to leave from Arlington, VA, so that cut down a couple of hours. Still, it was around a nine-hour drive that included a lengthy stretch on 81 (one of my least favorite highways) in VA and then 64 through West Virginia and Kentucky.

To be honest, it wasn’t a bad drive. The mountains in West Virginia are stunning – especially as the leaves were changing color. And, we had plenty of good tunes to help pass the time – including R.E.M. – Automatic For the People, Third Eye Blind’s self-titled debut, and Bob Marley – Legend.

When we finally arrived in Lexington, I was shocked at how small it was. Sure. The city limits sprawl out like any major city. But, downtown itself was small. That’s not a bad thing. I’m just used to the colossus-sized cities of the Northeast. And, for the next couple of days, I enjoyed the bourbon, brews, and history of Lexington.

We stayed at the Hilton Lexington Downtown. Opening-up the hotel window I was completely overlooking downtown. From my vantage point, I could see the Rupp Arena (the 20,000 plus seat home for the University of Kentucky’s basketball team), the ice rink in Triangle Park, and shopping centers like The Square. Let me also add that I had one of the best breakfasts ever at the hotel – chicken and waffles with a bourbon bacon maple syrup.

Since downtown is so small, you can definitely get around on foot. It would probably only take a few minutes to get where you’re going at that. But, if you want to get outside of downtown, the city is easy to navigate. There’s always Uber or Lyft if you’re enjoying some delicious bourbon.

Lexington, KY is a quaint, college town that’s known for two things; bourbon and horses. I loved that the city embraces both. Walking around the city you’ll come across the city’s famous painted horses. The most famous of these horses is the city’s mascot Big Lex.

There are real horses outside of town at the Kentucky Horse Park and Keeneland Race Course. I also heard that you can take a horse farm tour if you want to check out the homes of famous horses like Man o’ War, who is considered one of the greatest racing horses of all time.

As for bourbon, there’s no shortage of bourbon bars and distilleries – Alltech’s Lexington Brewery Company and Barrel House Distillery are located in the city itself. I didn’t have time to take the Bourbon Trail – I’ve been told that you need a couple of days to properly do this – but I did enjoy Woodford and Blanton’s.

Besides the horses and bourbon, Lexington is home to historic, period dwellings. I visited the Mary Todd Lincoln House while my friend was in her conference. The tour was only around an hour, but it was worth every minute. Walking into the house made you feel like you were stepping back in time. I know that’s cliche, but they did an amazing job in maintaining it’s historic look while filling it with historical furniture and knick knacks. The tour guide was pleasant and knowledgeable and i walked out with a newfound respect for Mrs. Lincoln. For example, did you know that after her husband’s’ death she spent several years traveling through Europe?

If you go to Lexington during basketball season, you at least need to venture over to the Rupp Arena. I didn’t have tickets to the game – sometimes I’m a terrible planner – but I did hangout outside the arena before the game immersed in a sea of white and blue. College fans have an energy that pro teams have a hard time revealing.

If you need some other suggestions, head on into the Lexington Visitors Center. It’s smack-dab in the middle of downtown and the people there are incredibly friendly. They actually spend the time to chat with you, make suggestions on your interests, and even draw a map for you.

If you’re tired of bourbon, there are also some wineries and a ton of breweries. I was told to go to West Sixth Brewing. It didn’t disappoint. In fact, it may be one of my favorite breweries. The beer was awesome and the brewery itself had a relaxed and chill vibe. I actually spent several hours here because I didn’t want to leave.

There are other breweries around, such as Country Boy, Ethereal, and Blue Stallion. And, since this is a college town, pretty much every other store is a bar. For a change of pace, check out Louie’s Wine Bar. 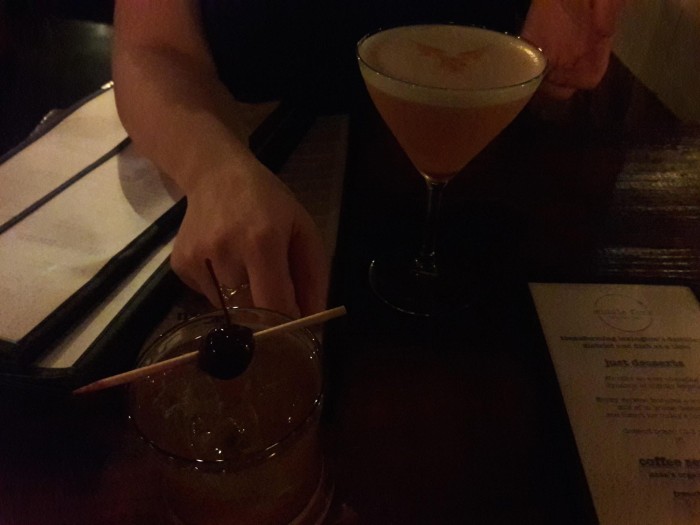 As for food, I’m still carving those chicken and waffles. If you’re craving brisket, then  your best bet is to visit the Country Club Restaurant. For another unforgettable meal, head over to Middle Fork. It’s a cozy restaurant just outside of downtown where you’ll indulge in cocktails (I thoroughly enjoyed a cocktail called the Suffering Bastard in Heaven – angel’s envy bourbon, haymans gin, lime juice, falernum, angostura, house made ginger beer) and fun dishes like their take on PB&J (fired-grilled baguette, ginger peanut sauce, lime-orange jam, chilis, cilantro, red onion pickles) and duck confit. Since the restaurant also uses seasonal ingredients, the menu changes throughout the year.